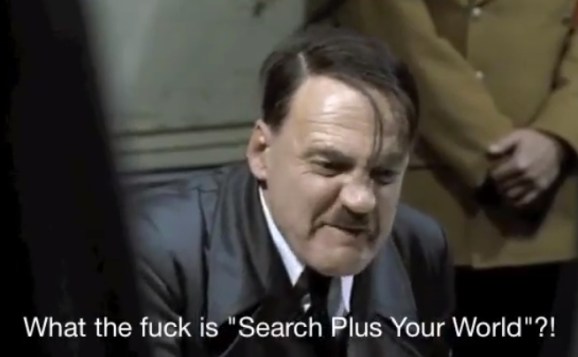 Google’s introduction of Google+ links into its search results is a big departure from the company’s previous more neutral approach to search, and it exposes the company to a huge risk.

It opens up the company to significant criticism from not just insiders but regular folks too, if they come to realize that Google is now favoring itself in search results, and therefore is no longer as useful. On the other hand, Google is making a big gamble: That it can favor its own results, and that no other search engine will pop up in the meantime to take its place with a more accurate and fair offering (there’s Microsoft’s Bing waiting in the wings).

An explanation of how Google’s latest approach is a fundamental change is made today by SearchEngineLand’s Danny Sullivan. He, like me, has been following Google’s moves closely over the years. And until now, all of Google’s moves have been fairly careful to stay neutral. For example, when Google introduced more video links higher in its search results several years ago, it did so by offering not only YouTube links, but also links from all other video providers across the Web, Sullivan explains.

Which is why the move to introduce Google+ results into its search is so troubling. By offering us only Google+ results, Google is forcing us to go outside of Google to find a fair representation fo social results competitors like Facebook or Twitter. Those companies have larger usage, and therefore they have more relevant results. Google apparently doesn’t care to show us those results. In other words, it’s another confirmation that Google has essentially “ditched search” as we’ve known it from Google since when the company started. At every turn since Google’s founding, it has managed to stay pure — or had espoused policies that showed it to basically be doing the right thing. Of course, Google doesn’t want to tell you that it has forsaken you, but read Sullivan’s post, and other examples by others who are saying the same thing, and make up your own mind.

Another expert who has been following the search field for years is John Battelle. And look what happened to him when he tried to search for a recent video about Adolf Hitler (see the video above; it’s quite funny, and it’s relevant). Basically, the entire top portion of Battelle’s page is taken up first by news results, and then second by Google Plus+, many of them links created by people he doesn’t even know. It’s not a Googley experience. And Battelle is right. Google apparently thinks beating Facebook is worth selling its soul. This change by Google appears to stems from the more aggressive stance by the company’s new CEO Larry Page, who has told his entire staff that their bonuses are tied to winning in social. As Battelle notes:

Now, this presents us all a conundrum. If a large percentage of people are logged into Google and/or Google+ when they are searching for stuff, that means Google+ pages are going to rank well for those people. Hence, I really have no choice but to play Google’s game, and tend to my Google+ page, be I a brand, a person, a small business…. are you getting the picture here? If you decide to NOT play on Google+, you will, in essence, be devalued in Google search, at least for the percentage of people who are logged in whilst using Google.

I dunno. This strikes me as wrong. I’ve spent nearly ten years building this site, Searchblog, and it has tens of thousands of inbound links, six thousand posts, nearly 30,000 comments, etc., etc. But if you are logged into Google+ and search for me, you’re going to get my Google+ profile first.

Google must be betting that it has enough power — enough clout with enough people to force them to use and play by Google Plus — that it can turn the corner and make its results essentially as useful as those offered by Facebook and Twitter. Peter Yared, who wrote a piece for us this week about Google’s foresaking of search, says Google needed to do this to survive, and he thinks Google’s algorithm will be enough to make its social search results “good enough.” That may be the case, but in the process, Google may be losing our trust. And that’s going to be the huge price it pays for this move.

See some of our other stories on Google’s recent Google Plus here: