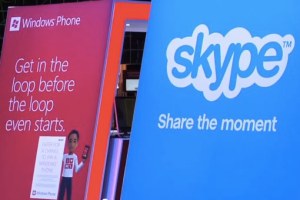 Microsoft’s acquisition of Skype promised to be a marriage made in an integration heaven — especially for Windows Phones owners — but so far it’s been all talk and no action.

A Skype for Windows Phone application, however, will soon make its debut, Skype vice president of products Rick Osterloh asserted in a recent interview taped at the Consumer Electronics Show in Vegas.

“We’re … working on a Windows Phone product that will be coming out soon,” he said.

When Microsoft purchased the video-conferencing company for $8.5 billion in June 2011 (the deal closed in October), it talked up an unrivaled Windows Phone Skype offering that would include deep integration between the voice over IP service and its mobile operating system. But the merger still has Windows Phone owners waiting for platform integration, let alone a basic application on par with what’s already offered on iPhone, Android and BlackBerry.

That wait is likely to continue. The first Windows Phone product, according to The Verge, could be released as soon as the Mobile World Congress in February, but it won’t be the much-ballyhooed operating system-wide offering originally touted by the companies. Windows Phone owners may have to wait for this rich Skype integration until the Apollo software release, which, according to a leaked roadmap, won’t happen until the fourth quarter of 2012.

“We understand, from our own sources, that the initial release of Skype will not feature deep Windows Phone integration, and that Microsoft is planning this for “Apollo” and beyond,” The Verge is reporting. “Microsoft’s first Windows Phone Skype application will largely be seen as an interim release until Windows Phone ‘Apollo’ is made available.”