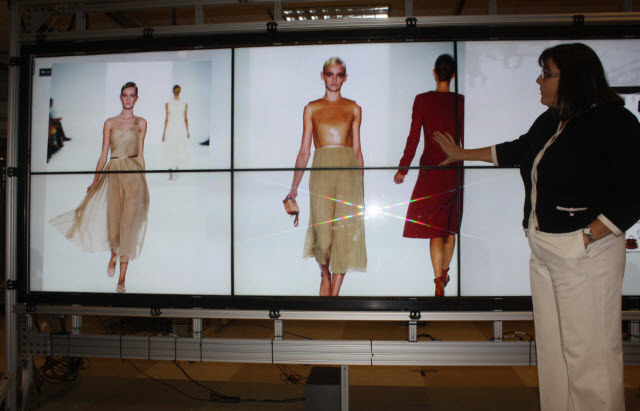 Hewlett-Packard sure knows how to build big stuff. Today, the world’s biggest computer maker is taking the wraps off its wall-sized 132-inch touchscreen displays that can be used in high-end retail displays or battlefield control rooms. HP hopes this will take its digital sign business to the next level. 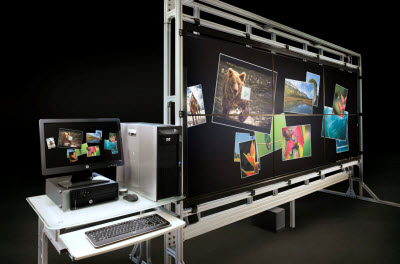 The HP VantagePoint system — 11 feet wide by 7 feet high — is driven by two computers with one graphics card and six monitors. Yet it is powerful enough to power a touchscreen that can register the simultaneous input of 32 fingers touching it at a time. A product of the Innovation Program Office in HP’s Personal Systems Group, the system costs $125,000 and extends HP’s portfolio of “immersive displays,” as a tool for showing off retail goods or visualizing enterprise data.

At that price, HP is lowering the cost of entry for businesses to use big screens for visualization. Companies can create an interactive wall to attract people into stores and help them see how clothes on the rack look on a real person. They can also entertain customers with big screen versions of games like Angry Birds. 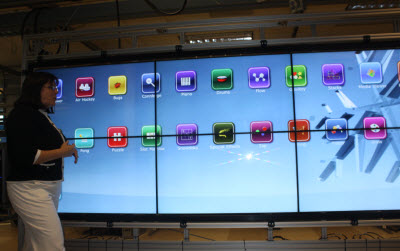 The screens can also be used in decision support or control rooms for corporate information technology professionals who have to manage vast computing resources. HP has five such control rooms in operation, running all of its network operations. It can be used as a centralized viewing room to get a real-time picture of the state of security in a prison or a government building, or it can be used to monitor disasters at reaction centers, said Carlos Montalvo (pictured at bottom), vice president of the innovation program office at HP.

“We want to transform the way businesses interact with customers,” he said in an interview. “We’ve taken this from inception to a commercial grade product that can scale.”

While the cost of the screen seems high, it’s actually not as expensive as many other solutions in the market. HP lowers the display costs by using six 47-inch liquid crystal display monitors whose cost can fall over time — all driven by the Eyefinity technology in the Radeon cards built by Advanced Micro Devices.

HP actually innovated on cost of ownership by creating a modular aluminum frame that supports the monitors. If one of the six HP LD4730G Ultra-Micro Bezel monitors goes dark, it can be replaced in a matter of minutes with a screwdriver and a couple of technicians carrying the display. In the past, big displays had to be assembled and tested over a period of days or weeks. But 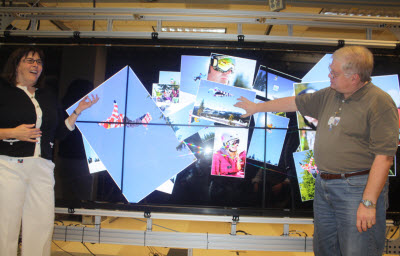 HP designed VantagePoint so it can be set up within an hour or so. Making installation easy and predictable is key to selling lots of these units.

Richard Doherty, an analyst at Envisioneering Group, said that hundreds of businesses and organizations that sell premium products are likely to take HP up on the technology, despite the high sticker price. He doesn’t see much competition that can scale to provide products across a large market. Customers are likely to include product designers, fashion designers, crisis managers, and high-value retailers, he said. The innovation lies in the ability to completely integrate the displays and the back-end information technology to make them work in a dependable manner, he said.

HP can also build even bigger interactive walls, some using its older Photon Engine, with a series of ordinary $1,200 projectors, beaming images on an ultra-high resolution screen as big as 40 feet. So the company can tailor the size of the wall to fit whatever a business wants. It can run it at 4K resolution, which is the format for next-generation TVs. A demo of the larger wall — showing a control room for dealing with the tsunami in Japan — is available in a video at the very bottom of this story.

“We found that we needed a bigger lab,” Montalvo said.

HP VantagePoint can be used in executive briefing centers, showrooms, retail, financial services, automotive, airline, consumer packaged goods and government. Customers could include Fortune 1000 companies, entertainment firms, or sports venues where larger-than-life experiences are the way to stand out from a crowd of traditional advertisements or signs.

Montalvo said the idea was born in HP a few years ago and was developed through collaboration with key partners including American Airlines, DreamWorks Animation, Edelman and the San Francisco 49ers. All of these companies have versions of the interactive wall on display at their premises. Fashion designer Diane von Furstenberg used the interactive wall to show off lines of clothing.

The first version of the interactive wall is in use at Edelman public relations, and since then HP has learned how to make the displays better and cheaper, said Mickie Calkins (pictured above and at top), HP co-innovation program manager in HP’s Personal Systems Group.

“This is 100 percent HP, home-grown,” she said. “The wall could be bigger, but we made it this size so it can be fully used by people of normal height.” 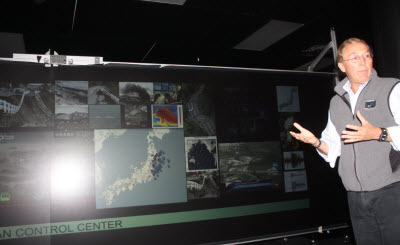 “The HP VantagePoint touch wall in our preview sales center creates a ‘wow’ factor,” said Al Guido, vice president at Legends Sales and Marketing, seller of premier seating at the future San Francisco 49ers stadium in Santa Clara, Calif. “It allows us to showcase our inventory and the new Santa Clara stadium in a unique visual demonstration that has undoubtedly helped our sales efforts.”

I’m interested in what it means for gamers. I played a version of Angry Birds on the wall and popped a bunch of color bubbles in a timed frenzy game as well. You can pick up and stretch or shrink photos and videos on the wall with your fingers. The screen is very responsive. I actually whacked it with a pair of drumsticks, and it didn’t leave a scratch. The glass can withstand a 56-mile-per-hour projectile.

The screens use an infrared-based touch technology to sense onscreen interaction. It features strong and scratch-resistant Gorilla Glass from Corning and is powered by an HP Z800 Workstation that handles video and image processing. An HP Pavilion Slimline PC controls the audio volume and color contrast.

HP can pipe content into the displays via cable and satellite feeds, as well as downloaded and streaming content from the web or DVR and DVD players. The signal is 100 percent digital and the system uses the 64-bit version of Windows 7 for applications.

Check out our videos of the HP VantagePoint wall in action.