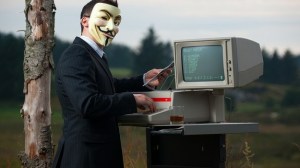 The White House shook up the debate over the controversial Stop Online Piracy Act (SOPA) this weekend, publishing a letter that made it clear the executive branch would not back a bill without changes that addressed concerns over online censorship and damage to the very architecture of the internet.

The big news is that Congress has agreed to shelve the vote on SOPA until it can find more common ground. But the battle over how best to address online piracy has now spun out far and wide. The hacktivist group Anonymous, for example, has found a juicy new target: stodgy old media executives.

The group obtained and then published posts with personal information about Jeffrey L. Bewkes, chairman and chief executive of Time Warner, and Sumner M. Redstone, who oversees Viacom and CBS. Both of these men run companies that support SOPA. As The New York Times reports,  after Anonymous exposed Mr. Bewkes personal email and home phone number, he received a wave of complaints from anti-SOPA advocates.

The people in power seem a little perplexed about the guerilla tactics. “Why can’t they just hire a lobbyist like everyone else?” a Congressional aide for the House Judiciary Committee asked the NY Times.

If you thought fabulously wealthy media moguls were going to take this lying down, think again. New Corp.’s Rupert Murdoch used his Twitter account over the weekend to respond to the White House letter. “So Obama has thrown in his lot with Silicon Valley paymasters who threaten all software creators with piracy, plain thievery,” he tweeted. “Piracy leader is Google who streams movies free, sells advts around them. No wonder pouring millions into lobbying.”

Murdoch seems more than a little confused about how search engines work, but hey, when you’re running a massive multinational corporation, you don’t always have time for the details.

Google responded via a letter to CNET. “This is just nonsense,” a Google spokeswoman declared. “Last year we took down 5 million infringing Web pages from our search results and invested more than $60 million in the fight against bad ads … We fight pirates and counterfeiters every day.”

The focus now will shift to the Senate, where Majority Leader Harry Reid has announced his intention to move forward with with a vote on PIPA, SOPA’s evil cousin, some time in the next two weeks. Expect a lot more fireworks, including a massive protest later this week from the New York Tech Meetup, which is holding an emergency event for its more than 19,000 members outside the offices of Senators Charles Schumer and Kirsten Gillibrand.