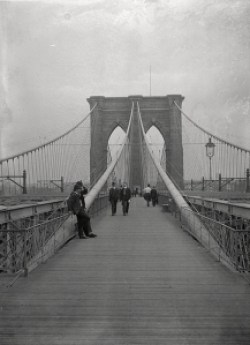 Charlie O’Donnell, formerly a principle at First Round Capital, is launching his own venture fund to focus on his home borough of Brooklyn. He announced the move on his blog this morning.

Having done stints investing at GE Capital, Union Square and First Round, O’Donnell is now aiming to raise a $10-20 million fund, sources say. The idea, he wrote on his blog, is to be, “leading or co-leading seed deals — having enough capital to meet a team at a hackathon, for example, and telling them, “I’m in and you now have a round.” I don’t like the idea of telling an entrepreneur to go get someone else interested and then I’ll be able to commit.”

He got some great praise from Union Square’s Fred Wilson, who told TechCrunch, “Charlie is pure Brooklyn hustle. It’s fantastic to see him focusing on the growing Brooklyn tech community. Startups are sprouting up in Greenpoint, Bushwick, Williamsburg, Fort Greene, Dumbo, Downtown Brooklyn, and Red Hook and probably in other neighborhoods too. Nobody is better suited to catalyze the Brooklyn tech community and seed it with startup capital than Charlie O’Donnell.”

As CB insight noted earlier this month, Brooklyn had just five venture deals in 2011, compared to 61 in New York. But a lot of entrepreneur activity goes on in Brooklyn, even if the venture funding doesn’t flow through there directly. As O’Donnell wrote, “Given that many of the companies I work with don’t even have offices yet, and that many of their founders and future employees live in Brooklyn, I won’t be surprised if the majority of the fund winds up being invested in Brooklyn startups. It’s a great place to build a business — creative, less expensive, flexible, etc.”