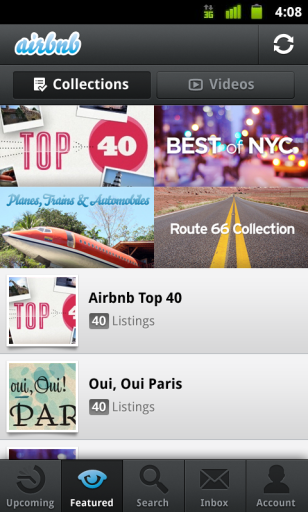 Airbnb, the website that lets you turn your house into a nightly hotel, introduced its Android application today, along with a new mobile website.

Airbnb lets people list their homes online for short-time renting. The company says that nearly 10 percent of its traffic comes from mobile users. Currently, the company only has an iOS application, which has been downloaded 500,000 times. But as popular as iPhones are, they are still not the No. 1 selling smartphone. A recent Nielsen report says that Android phones account for 43 percent of smartphones in use, while iPhones account for 28 percent. Airbnb says that extending its app to Android devices will help its mobile numbers climb in countries outside the US, where “pricing and availability” make Android phones better sellers.

Airbnb hosts rental offers from around 19,000 cities and towns in 192 different countries around the world. Many of these countries are more Android heavy than they are iPhone. Indeed, this Android app will be available on more than 100 different Android devices, where the iPhone app only reaches one. The app itself runs Android 2.1, up to the most recent Ice Cream Sandwich. Airbnb is so confident in Android’s reach, in fact, that it predicts it will double its mobile user base simply by introducing the Android app to the Marketplace.

A nice new feature in Airbnb’s apps is the ability to save information locally. Especially when traveling abroad, you may not have access to Wi-Fi, so having important information such as itinerary, reservation information and other “key components” of your trip with you wherever you go is more critical. This feature is also available on the company’s new mobile website, which will attract people of all phone types with Internet access.

Airbnb was founded in 2008 and recently took on a $112 million round of funding, launching its valuation to $1.3 billion.