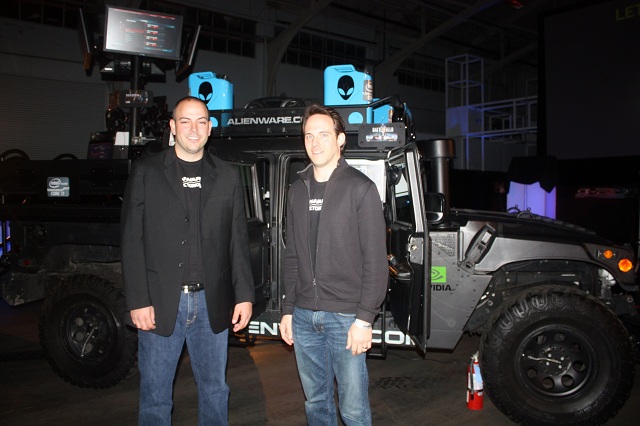 Dell’s Alienware division announced a gamer PC for the rest of us at an event in San Francisco tonight. At $699, the X51 gamer PC will be the cheapest desktop ever launched by the company and it represents an attempt to snare a larger audience of mass market gamers.

It seems like a smart move, since the consoles are starting to age now and a relatively cheap gamer PC can run circles around the PlayStation 3 or Xbox 360 in terms of graphics resolution for games such as Electronic Arts’ Battlefield 3. That’s leading to a revival of interest in gamer PCs, said Jorge Perez, an Alienware marketing director, in an interview. 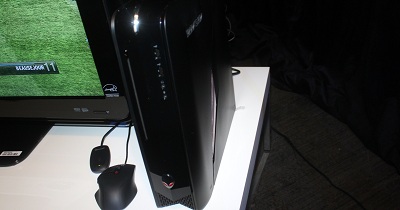 The PC goes on sale today and it sports a cool design that looks more like a console. It is about as small as an Xbox 360 or PlayStation 3 and can stand vertically or lie on its side. You can also hook it up via HDMI cables to your TV, enabling you to get better-than-console graphics on a big screen monitor or TV.

“We’ve already seen that enthusiast gamers want to connect their PC to the TV and take advantage of the big screen without sacrificing graphics,” Perez (pictured, right) said. “The goal is to make it accessible.”

The $699 model uses an Intel Core i3 microprocessor with a discrete Nvidia graphics card (the GeForce GT 545, upgradeable to a high-end GT 555 card), a terabyte of hard disk space, four gigabytes of main memory, WiFi, a slot-loading DVD player (upgradeable to a Blu-ray player), and 1 GB of GDDR5 graphics memory. If you soup up the machine with extras, it can cost around $1,200 or $1,300. The system has a 240-watt power supply, upgradeable to 330 watts. Monitors are extra. 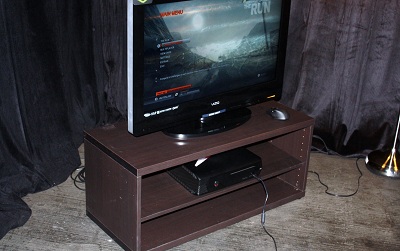 Normal Alienware machines cost $2,000 or more. But the time is ripe for the company to target the mass market as PC prices fall and interest in games grows wider, Perez said.

The cool thing about the small size of the console, with its signature Alienware logo and red or blue Alienware LED lighting, is that it looks like it fits in the living room. You can put it underneath a big-screen TV, hook it up via HDMI 1.4 cables, and play via a wireless Windows-compatible Xbox 360 game controller. All of a sudden, that transforms the X51 PC into a lean-back 10-foot experience, rather than a two-foot experience in a den. 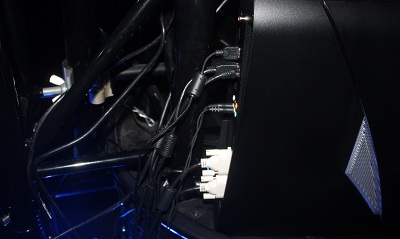 The graphics can be displayed in 1080p high-definition resolution, and you can blast the sound in 7.1 surround-sound audio or watch Blu-ray movies on it.

Frank Azor of Alienware said in an interview that the living room option is a good one because it allows the full freedom of the PC as an open entertainment platform in the living room. If you want to watch Netflix movies or any other PC content on your TV, you can do so. The system is upgradeable so you can add a heavy-duty or next-generation graphics card when needed.

“It’s not our goal to compete with consoles,” Azor (pictured left)  said. “We want to give gamers a choice.”

Alienware is also starting a new game brand in conjunction with the launch. The Game Victorious brand emphasizes skill, rather than a more overbearing “domination” theme that has been used with Alienware machines to date. That brand may also have  broader appeal, just like the machine. 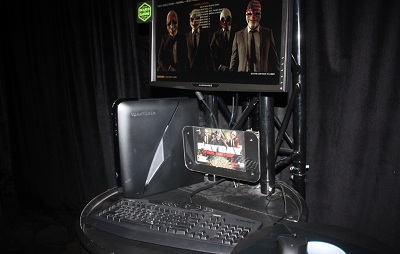 Azor said that while the upfront cost for a gamer PC is higher than a console, the pricing of games is more flexible on the PC. Rather than play games for $50 or $60 each as on the console, you can use the PC to access free-to-play games, massively multiplayer online games, and independent games as well.

In terms of usage, the new machine might appeal to college students playing games in dorm rooms, where space is at a premium and there may not be room for a console, in addition to a PC for doing school work.

Check out our video with Azor and Perez below.