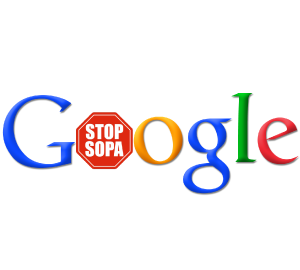 Adding a link or message to a company homepage to protest legislation may seem like a worthless gesture. That is, unless the company is Google.

Tomorrow, the search engine giant plans to add a link to its usually minimalistic homepage to show opposition to the proposed pieces of anti-piracy legislation, SOPA and PIPA.

“Like many businesses, entrepreneurs and web users, we oppose these bills because there are smart, targeted ways to shut down foreign rogue websites without asking American companies to censor the Internet,” Google said in a statement to Cnet. “So tomorrow we will be joining many other tech companies to highlight this issue on our US home page.”

SOPA gives both the U.S. government and copyright holders the authority to seek court orders against foreign-operated websites associated with infringing, pirating or counterfeiting intellectual property. If it becomes law, it could drastically change the way the Internet operates. For example, if a website is accused of containing copyright-infringing content (like a song, picture, video clip etc.), the site could be blocked by ISPs, de-indexed from search engines and even prevented from doing business online with services like PayPal.

Google’s actions will coincide with countless other online communities’ sites planning a blackout Jan. 18 to protest SOPA and its Senate equivalent PIPA. Those sites include Reddit, Wikipedia, the Cheezburger Network of blogs and many others. While not participating in the blackout, Twitter is apparently planning its own form of protest, as VentureBeat reported earlier.

The SOPA protests and blackouts also coincide with a congressional hearing scheduled for Jan. 18 to debate the bill’s potential effects on security, free speech and innovation.

Update: Google responded to our inquiries with the same official statement:

“Like many businesses, entrepreneurs and web users, we oppose these bills because there are smart, targeted ways to shut down foreign rogue websites without asking American companies to censor the Internet. So tomorrow we will be joining many other tech companies to highlight this issue on our US home page.”

For more information about the proposed SOPA legislation, check out this infographic about the bill’s negative effect on business and innovation as well as VentureBeat’s ongoing SOPA coverage.