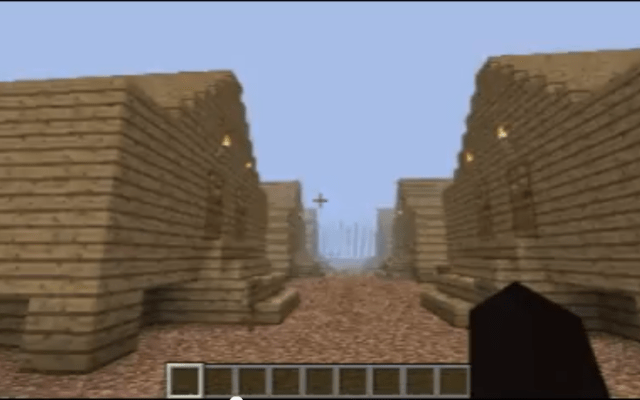 Randy Fujimoto has a mission statement on his website: “A quest to transform education through game-based learning.” That’s a big idea, to be sure, but we think he might have a chance to succeed, especially with his new model for teaching history using, of all things, Minecraft, the new indie gaming sensation that has players exploring, mining and creating in an open, sandbox world.

The new project shows the unintentional, creative consequences that result when developers create an open world game. We were able to chat a bit yesterday on the phone with Fujimoto about his current and future projects involving using Minecraft to teach students, and we came away almost as excited as he is about the potential.

Inspired by his own Minecraft experience as well as other educators using the game, Fujimoto set out to create a workshop to teach high school and middle school students about the incarceration of Japanese Americans during World War II. He is currently creating the lesson plans, the learning objectives, and the deliverables he’ll require of his summer students, but the main project will involve researching the internment camps, recreating them in the crafting wilds of a Minecraft server install (with a little help from interested educators at Temple University), and then having the students create a small video of the final replica to present to the rest of the students. The end result will be a fully documented educational learning experience involving hot indie game, Minecraft, that can that be used as a model by other teachers and students around the world.

Here’s a video of Fujimoto’s own internment camp, made completely in Minecraft, that he made as an example for his students.

Fujimoto wants to use Minecraft as “a hook to interest students in history – learning it from books can be boring,” he said in our phone conversation. “Ideally, I’d like to do a research study (on Minecraft learning), but this will mainly provide anecdotal evidence.”

Working with educators at Temple University – they’ve offered to provide server space for his workshop students – may give Fujimoto a whole group of educators to work with in the future – the folks there want to create a “guild” of sorts, as many do in massively multiplayer role playing game World of Warcraft, so that teachers and administrators can log on to Minecraft servers and meet up with other educators engaged in this new kind of 21st century learning. A similar initiative exists in the Massively Minecraft Network, created by a collaborative educational collective in Australia called Massively Productive.

Minecraft is being used by several other educators around the world to help connect students to their learning in a new way. The Minecraft EDU project is a modified version (mod) of the Minecraft server program to help less technically savvy teachers create their own Minecraft classroom, as it were. The mod provides a graphical interface for many server tricks and commands, allowing teachers to freeze students, teleport them to specific locations, and enable creative mode, among others. Joel Levin, a computer teacher at a private school in New York, teaches his first and second grade students in Minecraft, as well, blogging about his experiences along the way.

These educators are proving the point that students learn best when they are engaged in their learning. Using Minecraft as a teaching tool is only the current face of this kind of teaching and learning; there will be others in the near future. “All of these things have a short shelf life,” said Fujimoto, referring to Minecraft, “but even if it’s a couple of years, we’re transforming the way students learn in classrooms.”