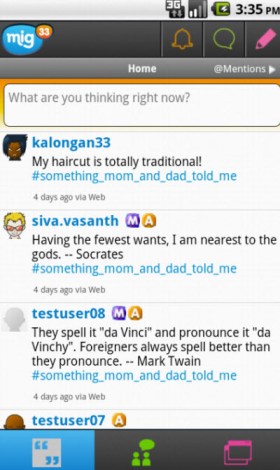 The move represents a major shift in focus for the Singapore-based mobile community, which will use the miniblog service to increase usage of its social networking features such as social games, chat, profiles and avatars. The service will debut in Indonesia first and expand to South and Southeast Asia.

Steven Goh, chief executive of Mig33, said in an interview that the miniblog was inspired by other services such as Twitter, Sina’s Weibo and Tumblr. This new service will become the centerpiece of Mig33’s social community, as it moves from a beta test with 300,000 daily active users to a full-scale service available to all of Mig33’s 55 million registered members.

“We think the miniblog will be the connector, the glue for our different services that connect users,” Goh said. “You can access rich media, play games, and earn badges directly within the platform. This represents an evolution of our community.”

The service lets you send 140-character messages and will be integrated with Mig33’s existing third-party games, chat, profiles and avatars. Goh said that will help distinguish it from other social internet services such as Facebook, Twitter, Sina’s Weibo, and Tumblr in the emerging markets. Goh said that the monetization of the various features will likely be improved as the miniblog draws attention to them. Right now, it’s harder to get traction for the games, but the social nature of the miniblog should help change that. 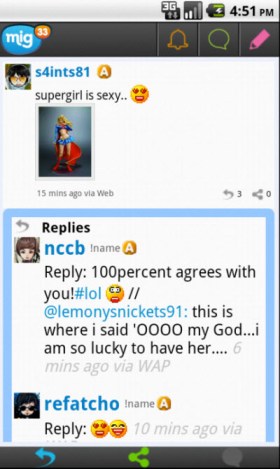 Goh said that Mig33 will offer gamification, or game-like reward systems for users such as leveling up, badges, labels, virtual gifts, avatars, emoticons, and actual games within the miniblog itself. Goh said that users will be able to escape the restriction of real world identity required by Facebook and thereby offer a more flexible and playful service.

Goh said that Mig33 chat users are sending 1 billion messages a day. In 2011, Mig33 delivered 300 billion messages and 185 million virtual gifts. Last August, it launched a bunch of third-party games and delivers about 300,000 daily active gamers to game developers. Goh plans to target the miniblog service at more than 500 million users in the emerging markets.

Goh is talking about the new Mig33 vision at the PTC’12 conference hosted by Pacific Telecommunications Council in Honolulu.

Mig 33 was founded in 2005 and has 115 employees. Backers include Accel Partners, Redpoint Ventures, DCM and Gree. The company has raised $38 million to date. Mig33 has 1.5 million unique users a day.