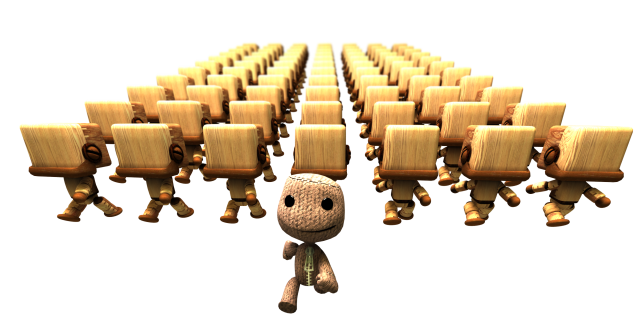 Another early LittleBigPlanet creation, this one has a particularly happy ending. Created as a playable marriage proposal, YouTube user Jed05’s girlfriend luckily said yes, after he went to the trouble of building a playable LBP level in order to pop the big question.

Recreation of classic gaming experiences is a popular theme on LBP, and this is one the best. Stepping into a neon-lit arcade and taking a seat at a free cabinet, allows the player to roll back the years with a faithful recreation of Donkey Kong. Very retro, very cool.

This is an innovative level, that uses a minimalist art style to help convey its theme of removing color to make progress. While retaining the LittleBigPlanet feel, the look of the level is something else entirely.

Educational games tend to get a pretty hard time, but this LBP level somehow manages to convey facts about STEM cell research with engaging presentation and platforming goodness. Created by David Dino, the level won Best in Class: Artistic at the Digital Media and Learning Competition 4.

Another great example of the creative use of LBP2’s video editing tools, this is the Inception movie trailer, remade with Sackboys. You’ll never look at Leonardo DiCaprio in the same way again.