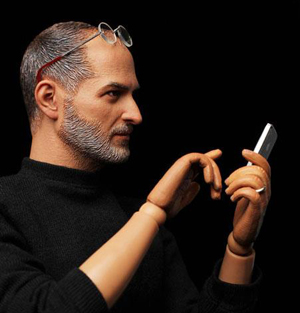 The Chinese company that planned to manufacture a life-like Steve Jobs action figure has scrapped its plans after Apple lawyers and Jobs’ family asked it to stop.

The somewhat creepy 1-foot-tall Jobs doll was unveiled by Chinese toy company In Icons a few weeks ago and immediately attracted headlines. The doll was supposed to include Jobs, a black turtleneck, blue jeans, sneakers, two pairs of glasses, black leather belt, black socks, two apples and a “One More Thing” backdrop. But the company has backpedaled due to “immense pressure.”

“Though we still believe we have not overstepped any legal boundaries, we have decided to completely stop the offer, production and sale of the Steve Jobs figurine out of our heartfelt sensitivity to the feelings of the Jobs family,” the company wrote in a statement on its homepage.

The decision to cancel the doll makes a lot of sense because Apple is serious about protecting its image and the legacy of its former CEO. A few days after it was announced, Apple’s lawyers reportedly told the company that depicting the Apple logo, Jobs’ name, his appearance or his likeness is a criminal offence.

In Icons said it will provide a full refund for anyone who pre-ordered the action figure.