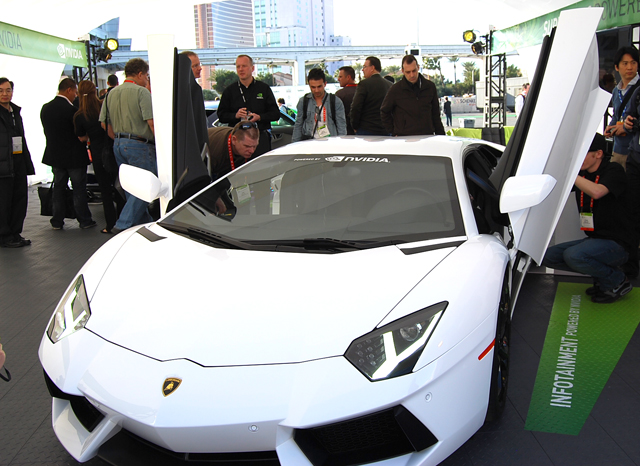 More than any other time in the history of the Consumer Electronics Show, car manufacturers showed up in full force to last week’s show in Las Vegas — a major sign that cars are going high tech this year.

While CES used to be filled with tech companies showing off car stereos, car manufacturers themselves are now taking up space on the floor to show off all the cool things their vehicles can do. And app vendors are going car heavy too — companies that showed off cool smartphone apps over the last couple of years are now hyping their apps for a car dashboard instead. If the dashboard doesn’t run apps directly, the console will find some sort of crazy way to interact with your apps using the driver’s voice.

For example, Mercedes-Benz head Dieter Zetsche debuted the Mbrace2 console, which connects the dashboard to the cloud for over-the-air software updates and gives the owner access to Facebook, Google, news highlights, and more from the dashboard. The Mbrace2 solution will also have 3G Internet access, but it’s unclear if you’d need to purchase a data plan to use it. The connected system will also include “remote access capabilities” such as remote vehicle health diagnostics, a driving journal, and speed alerts.

Ford, which has keynoted CES the last few years, showed off the latest of its Sync technology. Sync now has more apps for AppLink, a program in the console that interacts directly with iPhone and Android apps when the phone is connected via Bluetooth or USB. AppLink already lets you voice control apps like Pandora, Slacker, iHeartRadio and Stitcher, and now it works with a new NPR app that lets you create on-demand listening of your favorite NPR programs. Sync is installed in 4 million cars in the U.S., and Ford expects 9 million cars worldwide will have Sync installed by the end of 2015.

Chip-maker Nvidia had a tent just outside of the Las Vegas Convention Center at CES to show its own car integration. The company had two cars on display in the tent: a beautiful white Lamborghini Aventador (pictured above), which features an infotainment system with real-time Google Maps data. The other car was a stunning blue Audi A7, with Google-Earth-based 3D maps and night-vision cameras to help you not hit pedestrians. Nvidia also helps power the awesome-looking Tesla Model S sedan, which has a 17-inch touchscreen that controls the media, sunroof, door locks and navigation. All three cars have Nvida Tegra chips inside boosting capabilities.

Streaming media inside cars also took a nice leap forward with Harmon’s Aha console, which will now be available in select models from Subaru and Honda. Streaming services MOG and Rhapsody will work on Aha and provide on-demand music from their extensive catalogs so you’re never disconnected from your favorite songs. The streaming radio service Pandora also used CES to announce that it has partnered with a whopping 23 auto companies to make sure its music can play in their cars.

VentureBeat contributor Rocky Agrawal correctly points out that car and phone interegration has a lot of road for improvement, but we believe these car manufacturers are headed in the right direction.

You can view a gallery of all the cool car tech we saw at CES below: