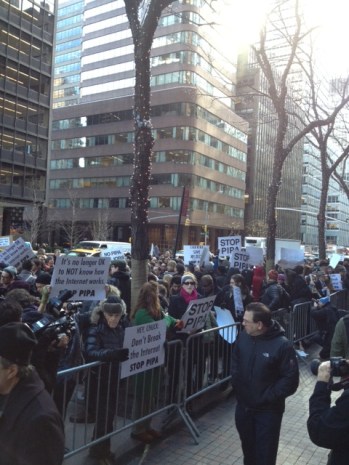 Hundreds of New York techies are gathered on 3rd Avenue and 49th Street, below trees strewn with holiday lights, waving signs and handing out flyers. “Stop SOPA, Pass on PIPA” they chanted.

The gathering was held outside the offices of their Senate representatives, Charles Schumer and Kirsten Gillibrand, to protest the anti-piracy bills being debated in D.C.

“You are the party of future,” said John Perry Barlow, co-founder of the Electronic Frontier Foundation. “But the party of past is fighting to keep their power. The model of top down power is clinging to life. We are on threshold of world where we can all satisfy our right to know and create.”

SOPA, or the Stop Online Piracy Act, and its sister bill PIPA, are meant to curtail online piracy, but if passed they could also lead to widespread censorship across the web. Major websites like Wikipedia, Google, and Craigslist, are demonstrating their opposition to the bill today by purposefully blacking out portions of their websites. So far, over 3 million people have signed petitions opposing SOPA and PIPA.

Speaking to the assembled crowd, Reddit co-founder Alexis Ohanian said, “We are here fighting the wholesale destruction of one of America’s healthiest industries… How many of you are hiring?” Hands went up all down the protest line. “Let us do our part to get the economy going again.”

What we have here right now is one the geekiest and most rational protests in New York history.

“The world isn’t flat, but the web is. Don’t let lobbying dollars choke off the best platform for innovation America has ever created,” Ohanian continued.

Brad Burnham, a managing partner at Union Square Ventures, discussed why investors should be worried about SOPA and PIPA: “These bills will impact investors, because they are so broadly worded they will sweep up all the companies here today. I was down in DC yesterday and they don’t understand how we interact with users. We empower users. The entertainment industry thinks of users as customers or crooks. We won’t break our promise to our users because the entertainment industry can’t keep up.”

Meanwhile, the crowd thunders with boos after learning senators have taken their phones off the hook to avoid the waves of calls coming in.