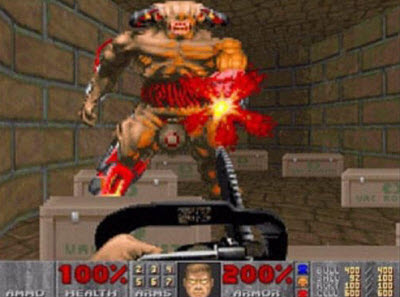 For those of you who are nostalgic for the BFG 9000 gun and its ability to lay waste to hordes of demonic monsters, there’s a little ray of sunshine. The original Doom video game is now available on Xbox Live. You can download the game for 400 Microsoft points, or about $5.

The mature-rated game is a classic from 1993, the early days of PC gaming. While the graphics look quaint now, they were realistic for their time and advanced the era of 3D graphics that began with Castle Wolfenstein 3D and ended with titles such as id Software’s Rage.

Doom was shocking in its day because it had a lot of blood and you could blow your enemies into little chunks with rockets or chop them into pieces with a chain saw. By today’s standards, that seems tame. But it marked a turning point in video games, which had a richer tradition as a children’s pastime. After Doom, games for adults grew as a market, and now first-person shooters are a multibillion-dollar market. 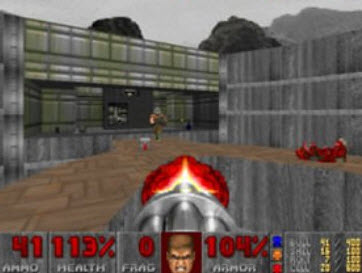 The game will have a few extras that are better than the old game. You can play deathmatches online on Xbox Live and battle friends for leaderboard rankings. You can also team up and the play cooperative mode.

The original Doom was created by a small team including John Carmack, John Romero, Adrian Carmack and Tom Hall. Those guys are now legends of the game industry, and John Carmack was inducted into the hall of fame for the industry’s peer group, the Academy of Interactive Sciences. Now high-end PC and console games are made by teams with 100 developers or more.

Doom is now owned by Bethesda Softworks, which acquired id Software. The game is still difficult to master and scary. Monsters jump out at you from hiding places and growl at you in the dark as they lob flame balls at you.