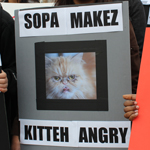 One speaker who garnered a lot attention was MC Hammer, who spoke out as a content producer and artist. He emphasized that legislators should not create laws which would stifle creativity.

“This SOPA bill, on the surface they say it’s to protect rights and content…but as you drill down you see all the clauses that would put a tremendous burden upon service providers and give the government the ability to shut down sites without due process,” said Hammer.

A group of tech entrepreneurs, software developers, and start-up employees assembled in San Francisco’s Civic Center Plaza in front of City Hall on Wednesday to show their staunch opposition to SOPA, the anti-piracy bill.

The speeches all had one general theme: Don’t let SOPA cripple start-up businesses and technology jobs. One major piece of the proposed legislation would give the government the ability to take down and block foreign websites which contain any copyright material used without permission. Start-up companies could be hit the hardest, because they wouldn’t necessarily have the resources to fight back if their website or business was affected by SOPA. Many of protesters expressed that SOPA would take away jobs and harm start-ups.

Caterina Fake, co-founder of Flickr, ended her speech by reading all of the signs the protesters held. Messages included “SOPA will kill jobs and innovation,” “Don’t break the Internet,” and “Censorship causes blindness.”

While the speakers had a lot to say about their opposition to SOPA, many protesters expressed their anti-SOPA sentiments as well.

“I am pro start-ups, pro tech, and pro new jobs,” said protester Katherine Adams, “I don’t like the ideas behind [SOPA], if we give them this inch, they will take a mile and I don’t want to give them that mile.”

Another protestor, Randy Lubin, expressed his happiness with the growing opposition to SOPA. “It’s been really fun to see the opposition building in the last few months,” Lubin said.