The International Consumer Electronics Show is a huge festival of gadgetry, but there’s no better place to get a bead on where technology is going in the coming year.

Among the 153,000 attendees at the show in Las Vegas last week were five VentureBeat staffers who were sniffing out the big trends. This story is our list of the most evident trends among the rows and rows of gadgets at CES.

The convention is like a step into the future, with many companies showing off the TVs, smartphones, computers and tablets that they will be bringing to market in the coming months. When you see the same kind of product over and over again, that’s a good sign that it will be dominating the tech headlines in the near future.

This story was written by Dean Takahashi, Dylan Tweney, Sean Ludwig, and Devindra Hardawar. Also check out the 10 most promising products of the coming year. For fun, here’s the link to last year’s top trends from CES 2011. 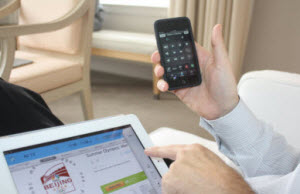 1. Connected TVs hook up with smartphones and tablets

Manufacturers have finally realized that the majority of us don’t just sit and watch TV: We usually have a phone, a laptop or a tablet in our lap whenever we tune in. That presents some interesting opportunities to the company that can figure out how to tie multiple screens together in an interesting way. For instance, everyone from Sony to Samsung is playing with ways of “swiping” a TV show from a touchscreen tablet onto your TV with a flick of the wrist. Gestures like this point to a day when you no longer need universal remotes, because the touchscreens you already own are a far better way to browse video content, whether it comes from cable, satellite, broadcast or internet sources like Hulu and YouTube.

More interesting, perhaps, is the possibilities that a “two-screen” experience opens up for connecting your TV-watching with your social networks and the internet at large. You could be watching the NFL game on the big screen while you look up stats on your little screen. You could be chatting with friends or sharing highlights via Twitter while watching the latest episode of Downton Abbey. Panasonic’s embrace of a reimagined MySpace might be the most prominent example of this aspiration, but other manufacturers, like LG and Sony, are working on it as well. And of course Google has been attempting this for several years, though we saw very little evidence at CES that Google TV has much traction among manufacturers or customers.

The big challenge: There are no broad standards to facilitate connecting TVs and tablets, and in the absence of that, every manufacturer is trying to own the whole burrito. If someone can figure out how to create a truly cross-platform TV and mobile device system, they’ll have a good shot at capturing a huge slice of consumer attention. –Dylan Tweney 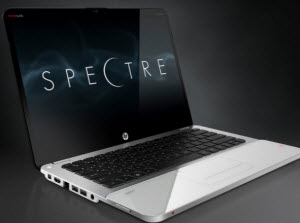 Who ever thought a new shape of laptop would be one of the most interesting aspects of CES?

Intel pushed Ultrabooks — its new name for thin and light ultraportable laptops — hard at the trade show. This year alone there will be more than 75 Ultrabook models on the market, and Intel has said that it’s gearing up its biggest marketing push since the Centrino lineup for the new machines. HP had one with Gorilla Glass on its cover, while Dell had one that was made out of carbon fiber.

Ultrabooks are basically everything I’ve ever wanted in a computer — except priced to be more approachable than Apple’s MacBook Air. For more on Ultrabooks, check out our recent feature: More than just hype, Ultrabooks are the future of laptop computing. –Devindra Hardawar 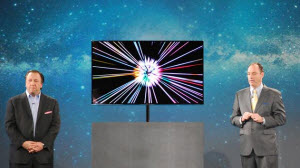 It may be a bit early to call OLED TVs a trend, what with only two models on display this year from LG and Samsung, but after being teased with OLED technology for years now, we feel it’s time to finally get excited for these displays, which represent the next-generation of HDTVs.

Why the hype? Since the OLED displays don’t require a backlight, they’re impossibly thin (LG’s display is only 4 millimeters deep with a 1mm bezel). They’re also capable of a richer color palette, dark-as-night blacks, and brightness beyond the capabilities of LCD sets. OLED also features fast response times (it doesn’t have the fast motion issues that LCD does), as well as extremely wide viewing angles.

The 55-inch OLED displays from LG and Samsung, which are expected to be released some time this year, are the closest the technology has gotten yet to dominating consumer living rooms. Expect even more OLED displays at CES next year, and most importantly, expect their initially exorbitant prices to fall within the next few years. –Devindra Hardawar