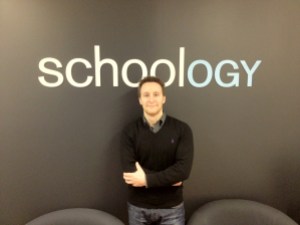 It might seem odd for a school district to choose to pay for a learning system when it has a free alternative right in its own backyard. But that’s just what the Palo Alto Unified School District did.

The district could have chosen Edmodo, the free educational technology service backed by LinkedIn’s Reid Hoffman and Facebook’s Matt Cohler and based right in its backyard. Instead it opted to pay for Schoology, a K-12 learning system that, up till now, has avoided any significant hype or funding.

The success of Schoology is based in part on a new approach to education software, which creates an approachable social network that teachers and students can begin using without having the school officially sign on. Startups like Coursekit are taking a similar approach.

“Getting around the slow, bureaucratic buying cycles of academic institutions is the first step,” said Schoology’s 24 year old founder Jeremy Friedman. “But from there you need to be able to scale up to meet the demands of an entire district.”

The reason services like Schoology and Coursekit are pursuing a social networking interface as a wedge into the market is obvious. Students and teachers already rely on Facebook as the default space for communication.

“Many of our teachers at the high schools had already moved away from the District provided platforms and were using Facebook in their classes. While this worked for them, we needed a manageable platform that could be expanded to all grade levels and provided education specific components such as an assignment dropbox,” said Ann Dunkin, director of technology at the Palo Alto Unified School District.

Schoology is a mix of a free social networking tool that empowers teachers and a paid enterprise level system that lets schools handle everything from curicullum to professional development. Since a number of students and teachers in the Palo Alto district were already using Schoology, upgrading to the enterprise was a no brainer.

“We want to be the operating system for education. You can add on as many modules as you need depending on how deeply you want to rely on our platform,” said Schoology’s Friedman.