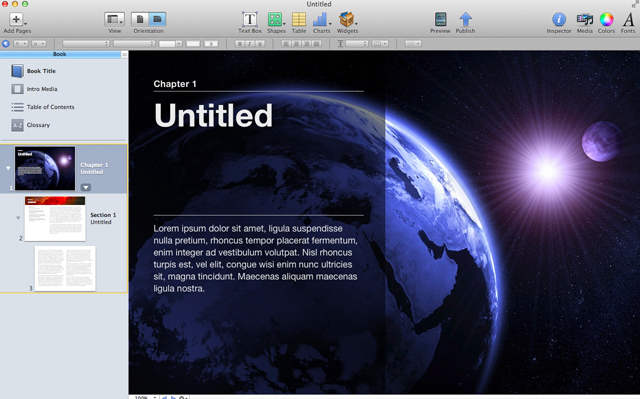 Apple unveiled several new apps Thursday aimed at reforming the way educators deal with textbooks, but the most interesting bit of Apple’s announcement could be the introduction of the iBooks Author app, which lets Mac users with Lion OSX create digital books for free.

I decided to take the iBooks Author app for a spin to see if the app follows Apple’s mantra of simplicity and usability, and I’m happy to report that it lives up to Apple’s typical high standards. One early report suggested Apple would launch a “Garageband for e-books,” and that phrase describes this app perfectly. Like Apple’s Garageband app makes the creation of digital songs intuitive, iBooks Author makes creating an e-book supremely simple.

When you open iBooks Author for the first time, you can choose from a template that helps you get going. Between choices like Botany, Astronomy and Art History, I chose the Astronomy template because it looked the most fun. After selecting it, the app showed a left hand column that navigates between parts of the book like the cover, introductory media, table of contents and the glossary. The setup reminded me a lot of navigating through Apple’s Keynote or Microsoft’s PowerPoint, but this is dedicated to books instead of presentations.

Unlike regular books, you can embed media into your e-books, such as movies, 3D models, photo galleries, interactive images and Keynote presentations. Also unlike regular books, you are given the ability to preview what your book looks like on the iPad before you publish. You can plug your iPad into your Mac or connect via a Wi-Fi network and click the Preview button on the top bar.

One major downside to this software is that only Lion OS users can use the iBooks Author app. All those Mac users with Snow Leopard or an earlier version of the Mac operating system are out of luck unless they update to Lion.

You can view a gallery of iBooks Author screenshots below. The first six are personal screenshots and last three are from Apple showing how pages look filled with media: