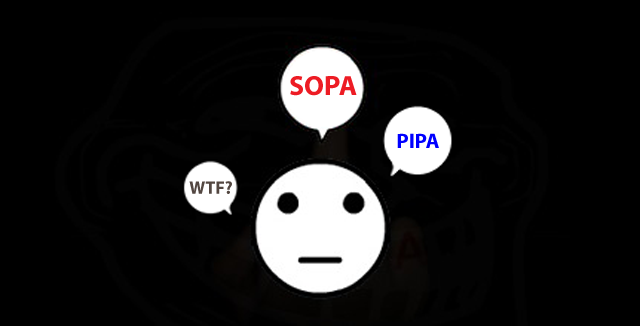 The furor over SOPA and PIPA has died down, but the bills have not gone away.

In fact, there’s more reason than ever to pay close attention to the House’s Stop Online Piracy Act (H.R. 3261) and the Senate’s corresponding Protect Intellectual Property Act (S.968). These acts, while perhaps well-intentioned, are not well-written and could cause serious damage to the free flow of information on the Internet.

At the peak of yesterday’s SOPA protests and website blackouts, it might have been easy to draw the conclusion that the tide was moving against these flawed bills and that they are doomed. Not so: They have merely been delayed. That’s why it’s more important than ever to pay close attention to what Congress is doing.

VentureBeat has had much internal discussion about the proposed anti-piracy legislation. There is a lot of misinformation  — or perhaps misinterpretation — about what SOPA/PIPA is, how SOPA/PIPA will affect the internet, why SOPA/PIPA bad, etc. Understandably, it can get confusing.

Based on our own reporting, we’ve concluded that both SOPA and PIPA are flawed a pieces of legislation, regardless of future amendments or rewrites. VentureBeat firmly opposes both bills because they have the potential to harm the tech industry and hinder the pace of innovation. And while we’re against SOPA/PIPA, we do not support piracy.

Below is a list of things about SOPA and PIPA worth considering before reaching your own conclusion about the proposed legislation.

The Stop Online Piracy Act (SOPA) — together with the corresponding Senate Protect IP Act (PIPA) — is a proposed piece of legislation intended to curb online piracy. As the bills are currently written, they gives both the U.S. government and copyright holders the authority to seek court orders against foreign-operated websites associated with infringing, pirating or counterfeiting intellectual property. If either bill becomes law, it could drastically change the way the Internet operates. For the full scope of information about the bills, check out VentureBeat’s ongoing SOPA/PIPA coverage.

2) Which U.S. political party is displaying the most support for SOPA/PIPA?

The answer is both — meaning both Republicans and Democrats are showing overwhelming support for these proposed pieces of legislation. If you need further proof, you should note who wrote the bills: SOPA was authored by Rep. Lamar Smith (R – Texas), while PIPA was authored by Sen. Patrick Leahy (D – Vt.). The White House has voiced its concerns about the legislation, but does agree that some kind of anti-piracy law is needed to protect American companies. It’s also worth noting that former sen. Christopher Dodd (D – Conn.) is now head of the Motion Picture Association of America (MPAA), which is one of the groups pushing for these bills to go through.

3) How do SOPA/PIPA intend to block websites?

The bills allow the U.S. Department of Justice as well as copyright holders to seek out and prosecute foreign sites that commit acts of piracy. The DOJ needs a court order before it can proceed, which it can obtain if the site in question is operated by an organization outside of the U.S. or the owner of the website’s domain doesn’t have adequate contact information.

Once a court order has been served, there are three main tools these bills give the DOJ and copyright holders for blocking websites. The first involves having an internet service provider (like Comcast, for example) block the site’s Domain Name Service (DNS) record. To do this, ISPs would be required to lower the level of security needed to verify each site’s identity and protect against malicious hackers. This also means SOPA/PIPA actually make the internet far less secure than it currently is.

Authors of both bills have wavered on their stance when it comes to DNS blocking. Smith previously stated that he intends to remove the DNS blocking stipulation from SOPA. Leahy admitted that more study is needed regarding DNS blocking, but hasn’t gone as far as to say he will remove it from PIPA. Regardless of either author’s stated intentions, both bills in their current form still include DNS blocking as a means to stop piracy.

Even if DNS blocking is removed from both SOPA and PIPA, the legislation still offers two tools to block websites. The second method of blocking involves mandating that major search engines (Google, Bing, Yahoo) de-index an accused site from their search results. The logic behind this action is that if you can’t search for sites that commit acts of piracy, then most people won’t be able to find those sites, and they will eventually die.

And finally, the third way prohibits any site accused of piracy from doing business with other services, such as PayPal or any advertising platform. If organizations that are selling pirated goods can’t use secure transaction services to collect purchases, they can’t make money. The same is true for ad networks.

4) Which sites can be blocked under SOPA/PIPA?

Contrary to much of the Internet hype, both the SOPA and PIPA bills would not be able to immediately shut down sites like YouTube and Reddit. The bills are going after sites that are operated by foreign organizations that are making money off of counterfeit goods and/or streaming media illegally. The bills, as written by their authors, won’t go after U.S. blogs or news sites. If a U.S. site is found violating copyrights, its subject to the laws that currently exist in the U.S., primarily the Digital Millennium Copyright Act (DMCA) (.pdf file) and prior copyright law.

Despite the foreign-site targeting, SOPA and PIPA could eventually turn into a huge nightmare for many U.S.-based sites, especially those with an audience that extend beyond the borders of this country. Since the definition for what’s considered a “foreign site” is vague within SOPA/PIPA, it could potentially allow some copyright holders to mount convincing legal attacks against some U.S. companies that operate internationally or allow foreign users to contribute to a U.S. site. That ambiguity alone has many Internet companies concerned.

5) How will this affect tech startups, innovation, and Google?

Because of vague definitions for “foreign sites,” critics fear that SOPA/PIPA will allow larger companies to sue smaller startups over copyright violations. Even if smaller startups end up winning legal battles over whether or not they violated SOPA/PIPA, the mere threat of a battle has the potential to ruin a company.

For instance, Veoh founder Dmitry Shapiro recently explained how his former company was “litigated to death” after Universal Music Group filed multiple lawsuits claiming that Veoh had violated the DMCA. These lawsuits eliminated Veoh’s ability to attract new investors and spend lots of time and money fighting in the courtroom. Eventually, Shapiro said Veoh was forced to lay off the majority of its employees and sell itself at a low “fire sale” price. While the courts eventually ruled that Veoh hadn’t violated DMCA, the company was essentially ruined. If SOPA/PIPA is permitted to repeat history like DMCA lawsuits did with Veoh, future innovative startups may have a harder time achieving success.

As for Google, it doesn’t like SOPA/PIPA because it essentially allows the government to influence its search results. This is a dangerous precedent, even though the proposed legislation is only trying to de-index sites that commit acts of piracy. Google has already faced legal opposition overseas — for instance, China places restrictions on what content Google can present in search results — and a U.S. challenge would only lend credence to other nations’ attempts to limit what a search engine can do.

6) What is Congress’ motivation to get an anti-piracy bill passed?

It’s easy to give a blanket statement about how members of Congress who support SOPA/PIPA are motivated by money from lobbyist groups that make large financial contributions to their re-election campaigns. That may be the case.

However, it also appears that they’ve been led to believe that these particular bills will thwart organizations operating in other countries that make money off of pirated content. They’d like to stop sites from stealing content and generating advertising revenue from it. It makes sense from this perspective, and piracy is a real and growing problem.

But SOPA/PIPA has the potential to go beyond limiting just foreign copyright pirates, which is why most of the tech business community is speaking out against it.

As for congressional support, there are currently 33 co-sponsors for PIPA and 30 co-sponsors for SOPA. Many congressional contact pages were displaying “Technical Difficulties” messages during the height of the protests yesterday, according to The Verge, which is no doubt due to a high number of constituents wishing to voice their opinions on the matter to their representatives in Washington.

8) Who is against SOPA/PIPA?

Plenty of organizations have come out in protest of the proposed bills, including (but not limited to) Google, Microsoft, Facebook, Twitter, Reddit, Wikipedia, Cheezburger Network, WordPress, Mozilla, The Internet Archive and many others. We’ve also compiled a list of SOPA/PIPA protest screenshots from sites opposing the bills as well as a list of gaming companies opposing SOPA and PIPA. In addition to opposition through organizations and businesses, hundreds of people gathered to protest SOPA in New York City today and over 3 million people have signed an anti- SOPA/PIPA petition online.

9) When will the House and Senate vote on these bills?

The House has pushed back all markup (debate, amendments, rewrites) for SOPA until February. We don’t have an official date for when a vote will take place on SOPA beyond that. PIPA, on the other hand, will be sent to the Senate floor for a vote on Jan. 24.

The best way to make an impact regarding the future of SOPA and PIPA is to contact your local congressperson, as VentureBeat’s Jolie O’Dell previously outlined. Taking our own advice, we also decided to call Congress in this week’s VB Weekly webcast.