GB: On the Xbox 360, you showed them how much better a scene would look if you had twice as much main memory, the 512 megabytes instead of 256, right?

TS:  Right. And they came through. They put in extra memory and that is one of the reasons we were able to make Gears of War look so compelling. Without that extra memory, we would have far less space for details. That decision cost Microsoft about $1 billion, but you can say that it paid off big time. They would not have succeeded to the extent they have today if they had not done that.

TS: And yeah we do that with each generation. Some of the conversations you will hear about, but these are also going on the behind scenes. The conversations happen across the board, not just with the console makers.

GB: How do you feel the age of the consoles right now, since it has been so many years since a new console launched. If you want to set yourself apart on graphics, I would guess that you don’t really like it when the generation of the console stretches out six or seven years. Would rather see the generations come sooner?

TS: The longevity of this console generation has been a mixed blessing. On the game side, it’s been really great for our business. We have been able to ship three Gears of War games on the same generation of hardware, each one with dramatic improvements over the last and a two to three-year development cycle. So it’s been a very good thing for a game business today. With each new title, there is a bigger and bigger Xbox 360 installed base of users, so the games can sell more. On the other hand, it gets harder to generate the same excitement from the same hardware. That is when the new hardware is justified. But then you reset the installed base to zero and it’s a lot harder to sell a lot of games again. So you should only replace the hardware when you can make a dramatic leap in quality, not just 2X or 3X. It has to be huge and fundamentally new. 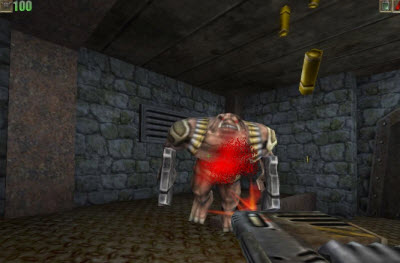 GB: So you can sort of see the business side of things as well as the technology?

TS: They are intricately linked. If you create awesome technology for the wrong platform, then nobody will ever adopt it. Epic in general has always tried to be really savvy on the business side. We look at the business models and changing trends and try to stay on top of them. If you look at Epic, we began as a shareware game company in the 1990s making really tiny games. Then we pulled together into one huge team and created the first Unreal game. At that point, we needed to build a huge game to compete with the likes of id Software. We changed our company dramatically to do that. Around 2004, we decided the game industry’s sweet spot was moving to consoles. So we made the transition from a PC game company to a console game company with Gears of War. Now we see new changes afoot with the move to mobile and web gaming with Adobe Flash. So we put together business relationships with Apple and Adobe and other folks to do what we need for the future.

GB: Your rivals didn’t change their strategy as much. They stayed put.

TS: The game industry is a very interesting because the average life of a game developer is may three, four or five years. Epic has been around for 20 years. The only way we did that is we weren’t one company for the whole time. We’ve had four different businesses in that time frame. Ten years from now, we might be developing entirely different kinds of games for entirely different platforms. We have to change to survive.

GB: What is your prediction about the next five years? What will Epic get involved in?

TS: With every console transition, people ask if there will be another console transition or another successful console platform. We are betting big that there will be. If you look at games like Call of Duty and Gears of War, it’s clear that console is the pinnacle of the gaming experience. so we are investing heavily with our engine and game development efforts for the next generation of console technology and games. But at the same time, we actually see this wonderful thing happening where the mobile platform and web platforms are getting to the point where they can run a AAA game. One consistent game engine technology can run across console, PC, mobile and web games. We’re really happy with that position. It lets game developers target lots of different platforms. We have shipped Infinity Blade of iOS. We have announced a new game Fortnite for an entirely different audience, more casual. It appeals to a wider audience than a hardcore game like Gears of War. We are branching out, but we tie it all together with AAA production values. 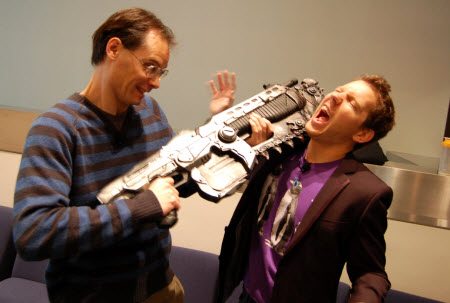 GB: That was a very different kind of game for you. When you heard that pitch inside the company, what was your reaction? It seems more cartoon-like to me than a game with rich 3D graphics.

TS: I would never imagine that we would be offering a game like that. But Mike Capps decided at one point that we were finishing Gears of War 3 and we had a whole lot of people available. We weren’t ready to ramp up our next AAA project yet. So we held an internal “game jam” inside Epic. Everybody in the company who was available divided up into teams and spent a week creating prototypes. We got a bunch of different prototypes and proposals out of it, with an incredible amount of variety. Fortnite arose through that process.  And it’s a really cool game to work on. There are a bunch of people at Epic who wanted to work on it. So when we saw that, then we knew the chances were that it would be a big game that would appeal to a lot of people. The graphics are not that bad. They have vivid colors and there are real-time shadows everywhere. There is destruction of buildings. The game is a technical powerhouse, though it’s not as obvious as in Gears of War.

GB: You started programming at the age of 10, right?

TS: Oh gosh yes. My older brother is 16 years older so we were never competitive like most brothers are. He was always my hero. He went off and got a job at a technology company in California. At some point, I went out to visit him and he had one of the very first IBM PCs that had been sold in California. So I got to spend a week programming his computer. I fell in love with the whole concept of programming. I’ve always love creating things, building things out of spare parts. But building physical things is always difficult and time consuming. But programming is really perfect. You write tight code and the computer executes it. There are no mechanical parts. It really engaged me. Then my family bought an Apple II computer. I spent about ten years building my programming skills on that before I tried anything commercially.

TS: Yes, a Malcolm Gladwell book, Outliers, mentioned that. I figured I spent at least 10,000 hours programming machines after school. I switched from Basic to machine language and saw the performance go up dramatically. It was an incredible learning experience figuring all the things that can be done with a computer.