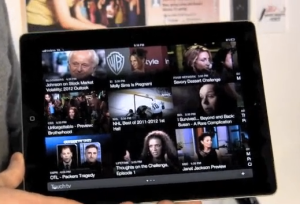 App maker SkyGrid has a plan to bring TV to your iPad. It’s also landed a promising partnership with huge Korean electronics maker LG to integrate its app technology into tens of millions of televisions.

We spent some time on the floor of CES last week talking with SkyGrid chief executive and founder Kevin Pomplun about his app and the new LG deal. (Watch our short, two-minute video interview below.)

“All you have to do is touch any channel, and it plays the best shows and programs you’re interested in,” Pomplun said of his app.

SkyGrid has won lots of praise for its information aggregation app, called SkyGrid, which uses data about what your friends are sharing on Facebook and Twitter to deliver tailored news to your small screen. Apple named SkyGrid one of the best news apps of the year for 2011. Now the company is turning its attention to television, with an app called Touchtv, for watching TV on your iPad. The app delivers video content and channels to you based on your interests and what your friends are watching.

“Touchtv was very natural. We just focused on the TV experience. … This is the SkyGrid experience, custom tailored for a pure and clean and very simple TV design,” Pomplun said.

The small company also got lucky by striking a deal with LG to integrate similar technology into its televisions. When you search for internet content on an LG smart television set, SkyGrid’s Touchtv technology will power recommendations shown on the screen. Touchtv will be integrated into LG televisions starting this quarter.

More and more people are watching TV while holding a tablet or smartphone in their lap. As TV makers wake up to this growing trend, they’re desperately trying to figure out how to make their TVs more like tablets, cramming apps and social features into them. It’s interesting to see companies on the other end of the spectrum, app makers, tackling the problem in their own way — and, in this case, meeting the TV makers on their own ground.

In addition to having an interesting technology, SkyGrid has been an unusually fortunate company. Its first app was one of the few apps Apple highlighted on the day it launched the iPad, a fact that gave the company’s employees a pleasant shock when they walked into the Apple Store to buy one of the first iPads — they had no idea that Apple had selected their app for special treatment. Later, SkyGrid became one of the featured apps in the Android Market. The two events helped bring the company and its tech to the attention of LG.