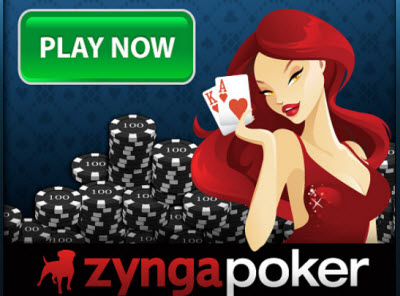 Slot machine maker International Game Technology answered that question with a resounding “Yes!” when it bought Double Down Interactive, a 70-person Facebook casino game studio, for $500 million on Jan. 13. Zynga’s shares started going up after the deal was announced, which came shortly after the Obama administration’s Justice Department ruled in December that online gambling was legal, as long as it was not sports-related, which was specifically prohibited in prior law.

That’s one reason why Zynga’s stock is reportedly rising. Zynga has more than 30 million monthly active users for its Facebook poker game, where you can pay real money to purchase virtual poker chips. But it’s not real gambling because you can’t take your winnings out of the game. If online gambling is legalized in certain states, Zynga could allow players in those states to bet and cash out real money.

On that topic, Zynga officially says the following:

““We build games and experiences that our players want and love. Zynga Poker is the world’s largest online poker game with more than 7 million people playing every day and over 30 million each month. We know from listening to our players that there’s an interest in the real money gambling market. We’re in active conversations with potential partners to better understand and explore this new opportunity.”

Arvind Bhatia, analyst at Sterne Agere, took note of the recent Zynga stock price increase and said he considered the legalization of online poker games across the U.S. to be a “long shot and highly speculative.” In an email, Bhatia said, “I don’t believe Zynga has any big advantages in online gaming compared to the more established players. Zynga’s (players) are gamers and not gamblers. Also, legalization of online gambling is obviously not a given and even if it happens it will probably take a while.”

Michael Pachter, analyst at Wedbush Securities, said, “I think it is highly unlikely. They don’t have the security in place to protect privacy, protect against fraud, report to regulators, and comply with federal, state and international laws. Others are already fully staffed and capable, and Zynga’s base of users doesn’t give them ownership if poker is legalized.”

Atul Bagga, analyst at Lazard Capital, said in an initial note on Zynga that online gambling was a possible expansion area for the company, but he still doesn’t see it as near-term. Long-term, he thinks the real-money online poker market in the U.S. could be a $3 billion to $5 billion market.

Zynga would face a new set of competitors like PartyGaming, PokerStars, FullTilt Poker, and Betfair. Eric Goldberg, managing director of Crossover Technologies, said, “I can’t think of a single US company that’s made a significant and successful move into gambling (including casino operations). There have been game arms of gambling companies, usually with the parent being foreign-domiciled; but the corporate DNA that the two industries produce is sufficiently foreign that the two business should not mix well.I think it more likely than not that Zynga will at least experiment with online/social gambling. (I think they’d be best served by running through out of a separate company, but that’s another discussion for another day.) At the same time, I believe any foray into online gambling has a relatively modest chance (say, 25 percent or less) of producing a material result.”

But Zynga has amassed a big audience of poker-minded people. Zynga has also earned enough trust over the past five years that it will run the game fairly and give virtual chips to those who win games. The company could make money by taking a small part of every pot, and states could generate tax revenue from that take.

But there are plenty of downsides to entering that market. Zynga would have to deal with tougher regulation of its behavior. It would also likely be forced to separate its game into two different parts, one where gambling is legal and one where it isn’t, partly because many of the players on Facebook are under-age. The company would have to redouble its efforts to combat fraud and make sure there is no cheating in the game. All of those efforts could be a distraction from company’s the basic mission, which is to make fun games.

Zynga hasn’t moved into international markets where the rules on poker games aren’t as strict. But it also has a big suite of casino games in the works, including a social version of Bingo. Zynga could build its audience of gamblers by adapting the games for real-money gambling and cross-promoting the gambling games to its known gamblers in its audience.

Online gambling could very well help Zynga with a shot in the arm for revenues. But it could also be a distraction from the core mission of making social games that entertain the world. In the age of the internet, it seems like all of the negatives around setting up a complex online poker gambling operation are surmountable. Zynga just has to decide if it purely focused on making fun games, or it wants to enter the gambling market.