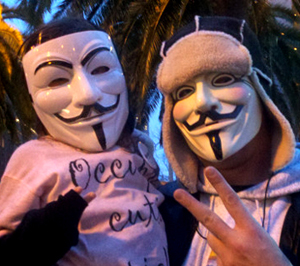 Hacker collective Anonymous continues to strike at sites around the Web in retaliation for the government shuttering Megaupload.com, and today the notorious group briefly took down broadcast network CBS’s homepage.

Anonymous has a long history of attacking government and business websites, and on Thursday the organization intermittently shut down the Department of Justice and Universal Music‘s websites. The collective said through various channels that it was retaliating for the shut down of popular file-sharing site Megaupload.com. Anonymous also recently made headlines for hacking into Stratfor’s website and database, stealing credit card information and other sensitive details.

Anonymous took down CBS.com in a rather unusual manner earlier today. As Gizmodo points out, the CBS takedown wasn’t a standard distributed denial-of-service (DDoS) attack because the CBS homepage only showed an index page with a single file. That suggests that whoever hacked the site deleted everything on it.

The CBS site was down for about 20 minutes, according to the @YourAnonNews Twitter account, an official broadcast channel for Anonymous. Showing its global reach, Anonymous is also apparently attacking several Brazilian websites today as well, including the websites of Brazil’s federal district and Tangara da Serra city. Quite a way to retaliate for Megaupload.

The Department of Justice indictment against Megaupload alleges that it is connected to a vast criminal enterprise has caused more than $500 million in harm to copyright owners. If convicted, the company and its executives could forfeit $175 million in assets, including 15 Mercedes, a Maserati, a Lamborghini, a Rolls-Royce with the license plate “GOD,” and a huge pile of computers and large-screen TVs. Four people, including Megaupload founder Kim Dotcom, were arrested Thursday in New Zealand, and three others named in the indictment are unaccounted for.

You can see a screen grab of CBS.com’s homepage from earlier today below: