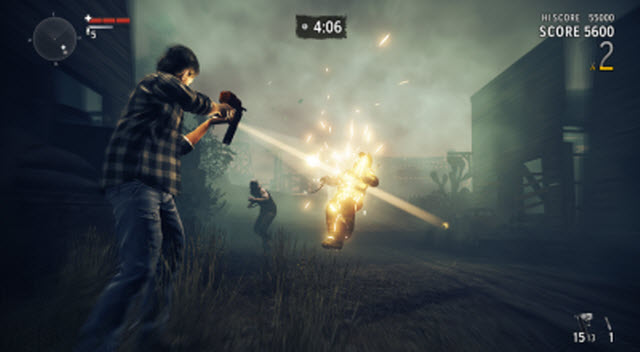 Alan Wake was a high-potential game that didn’t sell as well as expected in 2010. Critics said that the story was great, but the game play of the psychological thriller title was mediocre. Amid rivals such as the spectacular western Red Dead Redemption, which came out at the same time, Alan Wake got a lukewarm reception. With a new downloadable game coming, the question at hand for Alan Wake is whether the franchise can make a comeback. 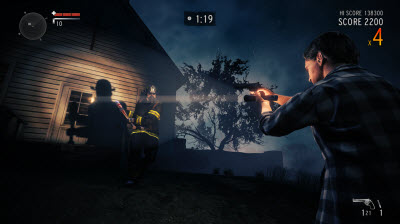 Other developers might have given up on it. But to its credit, developer Remedy Entertainment has stayed with Alan Wake and executed on its original episodic vision. It released two downloadable add-ons to the original Alan Wake game in 2010. And now the company is releasing a re-imagined game, Alan Wake’s American Nightmare, as a full-sized stand-alone game on Xbox Live Arcade. It is part of a new Microsoft Studios campaign, dubbed Xbox Live Arcade House Party, which starts on Feb. 15 and includes the launch of a new stand-alone game each week for a month. The Alan Wake game will debut Feb. 22 as a teen-rated title for 1,200 Microsoft points, or $15.

The game is much more ambitious than previous Alan Wake downloadable content (DLC) and that is the whole point of Xbox Live Arcade House Party. If these games prove to be popular, then they will be one more step toward the decline of retail stores and the rise of digital distribution of games. And Alan Wake’s American Nightmare is an attempt to show that the franchise still has a lot of life left in it.

The original story had a truly unique and artistic storyline. Famous novelist Alan Wake visited a small town of Bright Falls in the Northwest in an attempt to get over writers block. As he arrives there, his wife Alice is kidnapped. As he searches for her, he finds to his horror that events that he has written about in his fiction are coming to life. He finds pages from an unpublished novel he doesn’t remember writing and the novel’s fictional events become real. Creatures attack Wake in the darkness, who has to fight back with weapons that produce light, from flares to flashlights. The game had an innovative game style that revolves around manipulating the power of light against the forces of darkness. It was visually arresting and had an atmosphere that was as creepy as the Stephen King novels or horror movies that inspired it. 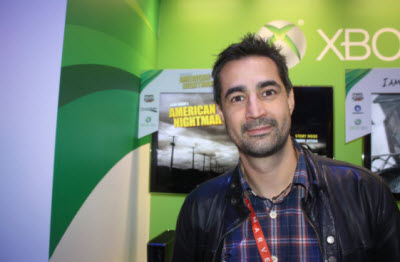 But the game’s enemies became predictable and unvarying in the way they attacked. Dispatching them became more of a chore, and a slow-motion sequence that played every time you got attacked became part of the monotony, according to those who rated the game the poorest. The average score on Metacritic was 83. The game sold more than a million copies, but given its long six-year gestation, Microsoft expected it to sell a lot more than that.

“People universally loved the story and the character in the first game,” said Oskari “Oz” Hakkinen (pictured right), head of franchise development at Remedy, in an interview at the recent Consumer Electronics Show. “One thing they asked for more of was an escalation of enemies and an escalation of weapons.”

The new game has an enticing story as well, set in the town of Night Springs in the desert of Arizona. This game features the villain Mr. Scratch, an alter ego of Alan Wake. Scratch, who was first introduced in the DLC, is a serial killer who is hunting after Wake’s missing wife. Scratch is the evil dark twin of Wake from Bright Falls, where the locals believe a novelist when crazy and killed his wife. Wake has to defeat Scratch and the minions of the night and rescue Alice. Wake now has a new advantage, as he realizes he can rewrite reality by creating the text that he wants to see happen. The game is about a four or five-hour experience, following Night Springs episodes that Wake doesn’t remember writing. 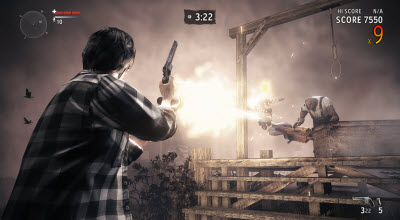 Hakkinen said that Remedy heard its fans and listened to their criticisms. It responded by coming up with a game that has a lot more action in it. There are new kinds of enemies — which are beings called The Taken that are animated with an evil spirit  — that are harder to dispatch, particularly when several of them are coming at you from all directions.

The game engine produces the same cool light and darkness visuals, but it’s more responsive. The technology has moved forward so the graphics look even more gorgeous against the red Arizona sky.

“We’ve improved a lot of things,” Hakkinen said. “In the story mode, the environments are more destructible.”

Among the cool parts of the new game is an Arcade mode where the object is to survive as long as you can amid a sea of enemies coming out of the darkness. This is the part of the game that the developers created first when they were tooling around with ideas. They created a survival game that they felt could become the heart of an Xbox Live Arcade game.They began development on it, but story wizard Sam Lake, creator of the original story, weighed in on the project and got the story mode into development, since Remedy is really known as a story-based game company. The new story is more like a pulp action-adventure. Whereas Alan Wake was more like a Stephen King horror novel — with influences from Twin Peaks and Alfred Hitchcock — this is more like Quentin Tarantino’s From Dusk ‘Til Dawn or Grindhouse, only on Route 66 in Arizona with a lot of cactus around. 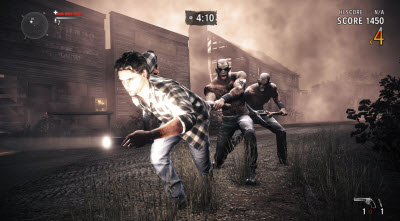 The mode lets you “fight till dawn!,” a horde-mode-like game where the object is to survive for 10 minutes in a field where all sorts of enemies attacked Alan Wake at a faster and faster pace, up until the point where Wake has to pull out all of his tricks for survival to get a few more seconds of life. There are 10 different maps that are scattered with havens that store ammo and flashlight batteries. You can dash for a street light to escape those chasing you, but once you use such a shelter, it goes dark.

The Arcade mode highlights some of the new variety to the enemies. If you shine your light on one type of enemy, it will simply clone itself and produce another one that will attack you. You have to take these enemies out by shooting them in the dark. And while most of the enemies attack you, the Grenadier will hang in the background, lobbing grenades at you. When you chase after the Grenadier, it runs away and it will only cease throwing grenades once you catch it. Another enemy is armed with a chain saw and is pretty hard to kill.

“You’re rewarded for taking risks by getting multipliers when you score,” Hakkinen said.

The game starts off slow, giving you time to search for resources and collect them. Wake can find and use some interesting new weapons such as the “nail gun,” which shoots out a deadly spray of nails. They quickly dispatch enemies, but the nails run out.Other weapons include submachine guns, Uzis, and a crossbow. You can dodge enemies as they’re about to slash you.

Your health meter runs lower every time you get hit. As you find first-aid packs, you can use them to replenish your health, but only part of it. When all is hopeless and you are surrounded by multiple enemies, you can set off a flash bang grenade or a flare. 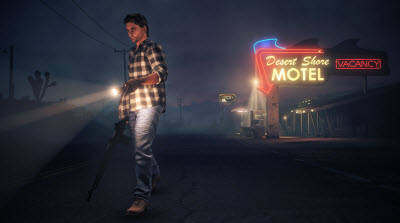 I watched Oz play a 10-minute round that was truly riveting. He had to move from haven to haven, conserve his ammo and save it for some big moments when he was about to get killed. We were counting the seconds down as he had to avoid pick axes, chain saws, scythes and grenades all it once. He tried to use the light havens and flares at the moment when he needed them the most. It was pretty breathtaking.

When you’re done, you can see your stats. Once you master the Arcade mode, you can move into the even harder Nightmare mode.

The tough thing for Remedy is that some gamers may not be willing to give Alan Wake’s American Nightmare a chance because they tried the game play of the original title and found that it was lacking. The message Remedy has to get across is that this game play is a lot more fun. But if this game takes off on Xbox Live, fans of the series just might be able to breathe easier about some day seeing Alan Wake 2, a true sequel, to the original game. The original trailer is below and here’s a link to a video of the arcade mode.