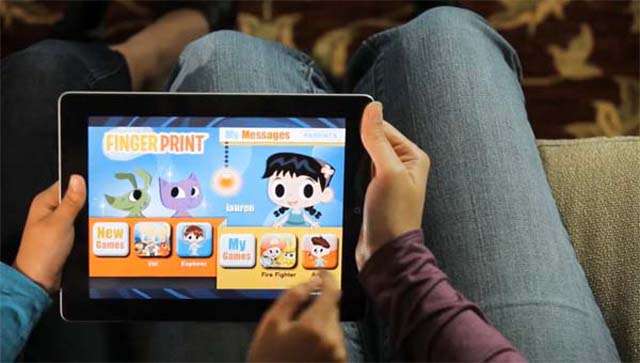 Edutainment startup Fingerprint Digital says its first five educational gaming apps for children have seen a 150 percent increase in game play minutes in the last month, demonstrating success in what the company says is a largely untapped market.

Fingerprint says it has a first-of-its-kind learning and entertainment network made up of high-quality mobile apps from first and third-party developers. Every application in the hub is designed to foster communication between children and their parents through the use of voice messages, game play reports called “Snapshots,” notes of encouragement, and game recommendations.

The Fingerprint platform allows any third-party developer that meets the company’s curriculum and quality standards to integrate their game into the network and take advantage of its communication features. In this way, Fingerprint Digital says it can provide an enhanced experience for children and parents that will ultimately be more compelling than standalone apps from edutainment competitors such as Callaway, Ruckus Media Group, and LaunchPad.

Fingerprint Digital says kids have signed in to the network more than 607,000 times and have spent 5 million minutes playing its five debut games since their December 1st launch. It estimates the average game play session lasts 8.15 minutes, and over 1.3 million Snapshot reports have been sent to parents informing them of their child’s progress. Chief Executive Officer Nancy MacIntyre says those numbers are nothing short of compelling.

“The lengthy game play sessions show us kids are enjoying the games, while the sheer volume of Snapshot reports generated help parents know what their kids are playing,” she said. “Equally impressive are the conversion numbers. Once kids have experienced one of the apps, they’ve asked their parents to download others. For example, over 60 percent of users who play Big Kid Life Fire Fighter are downloading Big Kid Life Fairy Princess. We’re definitely seeing the benefits of the hub and recommendation feature.”

MacIntyre, former executive vice president of product and marketing at educational toy company LeapFrog Enterprises, co-founded Fingerprint in July 2010 with Kevin Wendle and Daniel Klaus of K2MediaLabs after recognizing a growing opportunity in the mobile space for educational children’s apps. Based in San Francisco, the 12-person company has raised $1.4 million in funding to date from investors K2MediaLabs, THQ, Reed Elsevier Ventures, and Suffolk Holdings.

MacIntyre says the company’s goals are simple. “Grow our user base of Fingerprint families globally, make our products available on Android, continue to expand platform features that connect grown-ups and their kids, and recruit the best kids developers and content creators to ‘fingerprint’ their content using our SDK to publish on our platform,” she said. “All our activity is focused on making Fingerprint the first mobile network for kids learning and play.”

Fingerprint is currently working on a slate of new games scheduled to launch sometime this year. Next month, the company will release Kid Explorer, which will be the first Fingerprint game to feature expandable content.