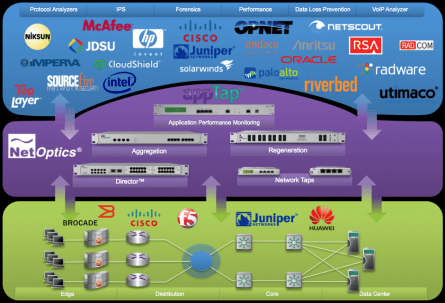 Net Optics, a company that lets you listen in on your network activity, has acquired TripleLayer and nMetrics in an effort to create more easily-installed products in an anything but user-friendly industry.

“We adopted the use of a product kind of like Apple,” said Net Optics chief executive Bob Shaw in an interview. “You open it up, it’s simple to configure, and it just works.”

There are a few levels to a network. The first level is the actual hardware that exists in your data center. These data centers are filled with server racks that hold the physical equipment that makes your network run. But you need a way to listen to those networks, watch the processes happening inside the boxes. That’s where the second level comes in, tapping devices. Similar to what you think of with telephones, these boxes are connected to the network and essentially “listen in” on the conversations happening inside. They can tell where something is slowing down, if there’s a bottleneck, and can watch the network as information goes from one device to the next, a process that makes information vulnerable to attacks.

These taps exist across the market, but Net Optics decided its taps needed something more, it needed to address a new market.

Along with taps comes tools, such as McAfee, Palo Alto Networks, Imperva, and a number of other applications, that help secure and manage information coming through the network. These applications are expensive, and live separately from the taps and server hardware, as a software management layer. Installing them means taking down the whole system, integrating the tool and then booting the network back up. This can be more than costly for midsized companies, so apps like these address the enterprise market. They leave the little guy behind.

“Customers were saying that some of these tools are very expensive and companies who can afford these tools were only in the enterprise,” Net Optics founder Eldad Matityahu told VentureBeat. “So Bob and I decided to look at the middle market.”

The company turned to its distribution partner Triplelayer. Triplelayer, a small company in Australia, acted as a the gateway to countries in the Asia-Pacific and developed an eight-year relationship with Net Optics. The company’s sister, nMetrics, however, had less of a relationship with the company, but was developing interesting software, which Net Optics saw as an opportunity. The company scooped up nMetric’s technology to create a mid-layer between the applications and the tapping devices. Thus was born AppTaps.

AppTaps is a bit of software that lives on the taps hardware. When a tap is installed to the network, it comes preloaded with software that replaces security and monitoring apps on a very basic level. You don’t have to take the network offline to install AppTaps either. Thus, midsize companies are able to afford better coverage of their networks. The coverage with AppTaps is better than just putting in a listening device. In addition to watching the network, AppTaps can give you analytics about what’s happening, sends alerts when something goes wrong, and sends push notifications to your phone and email.

All of Net Optics’ high profile clients such as Google, eBay, IBM, Oracle and AT&T are installing AppTaps. Indeed, AT&T wants 1,000 AppTaps installed at its endpoints — the towers and individual stores — so that it can monitor network activity from computers it usually doesn’t have access to. Because of its success, Net Optics decided to assimilate TripleLayer and nMetrics officially into the company.

The two companies are “desks across each other in a room,” according to Matityahu, but pack a lot of power. They total seven employees and two co-founders, one for each sister company. TripleLayer will now handle all of distribution for Net Optics’ Asia-Pacific shipping, and nMetrics will continue to write code for the AppTaps product.

Net Optics has not revealed the purchase price.