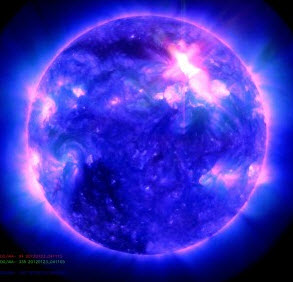 The sun burped. A big solar flare burst out of the sun on Sunday night, sending a ton of ionized matter towards the Earth at 1,400 miles per second. The resulting solar radiation storm from the ionized blast is expected to hit the earth Tuesday morning, according to the National Oceanic and Atmospheric Administration’s Space Weather Prediction Center (SWPC).

The consequences could be tough for electronics that don’t have the proper shielding. Solar storms can knock out satellites in orbit and force planes to alter their routes that go over the polar caps, where the planet’s geomagnetic shielding is thin, according to Scientific American. They can also create a light show, bringing the Aurora Borealis, the Northern Lights, down to lower latitudes, perhaps as far south as Illinois and Oregon. It could cause blackouts, disrupt satellite-based navigation systems, and interrupt radio communications.

The last time this happened on this scale was 2005. The so-called Coronal Mass Ejection could hit the Earth around 6 am Pacific time on Tuesday Jan. 24, but the timing is not certain.

[Update: the event has come and gone without widespread reports of fried electronics. So it was safe to take your iPad out of the house.]