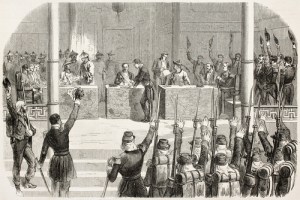 Like most great ideas, the inspiration for this article came to me while at a bar at approximately 11:37pm on a Thursday night.

It must have been 11:37pm because I had been working on a report to present the next morning until eleven o’clock.

My roommate convinced me to go grab a drink at our local bar and I agreed because I needed to take my mind off work for a few minutes before going to bed.

So when a guy at the bar asked me what I did and wanted to hear about my startup I snapped at him. “I’ve been working all night. Work is the last thing I want to talk about.”

But it turned out he also worked at startup. And was also a History major in college. This guy’s startup deals with finance so almost everyone else he works with studied finance or engineering in college. He gets asked all the time why he studied history and his response was so good that I made a mental note to remember it for the next time someone asks me why I studied history.

“Being a history major taught me how to be an analyst. I learned how to distill incredible amounts of information into a thesis statement. It’s easier to write a ten-page paper than a two-page paper. History teaches you perspective,” he said, “I don’t know how anyone who studied history isn’t in Silicon Valley right now.”

And that’s just it. Silicon Valley is the boomtown of our age. This startup scene will someday be romanticized the same way Mad Men depicts advertising in the 1950s, Pan Am shows air travel in the 1960s, and some movies present Wall Street of the 1980s.

Those of us who are working long hours in the hope that our company will be the next Facebook, Twitter, or AirBnB are living in a historic moment. The hotbed of excitement in our era is right here in Silicon Valley.

It took all my strength not to book a one-way ticket to Burma when I found out that the United States restored relations with the country. As a journalist, I have an itch to be where the news is. That, and I have a personal connection to the country from doing some NGO work there. Burma is also having a historic moment. I’d try to liken it to this same moment in the tech industry, but that’s not just fair.

At least if I can’t be part of one historic moment, I can be part of another.

Being a history major in the tech industry has other perks.

For example, I understood the analogy when our CEO said a venture capitalist once compared the old conflict between Facebook and Zynga to the Cuban Missile Crisis because of the potential for mutually assured destruction if Facebook didn’t let Zynga use its platform.

Also, I could sympathize with the CEO when he was explaining the challenge of distilling all the ideas our company has into a two-minute pitch to a venture capitalist who hears thousands of pitches. It’s just like trying to answer whether Peter the Great was a hero or a villain in a thesis statement or explaining the causes of World War I in a paragraph.

A late-night chat in a bar reminded me that it’s not necessary to study engineering, marketing, or business if you want to work at a startup. There are benefits to studying other disciplines as long as you know how to argue that what you studied gives you a unique and valuable perspective.

View from the other side of the hiring process

Fake it until you make it