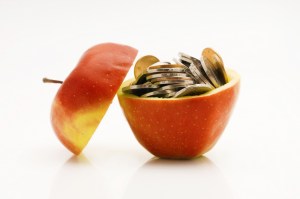 Apple notably missed Wall Street’s expectations for the first time in a long time during its last earnings report. But the company changed the release of its iPhone launch schedule by a quarter and consumers were holding out for a new iPhone model, so expectations were simply too high at that time.

Apple righted that with today’s numbers. Here’s a brief look at Apple’s staggering numbers from the first quarter:

Net income: $13.06 billion, compared to $6 billion in the year-ago quarter