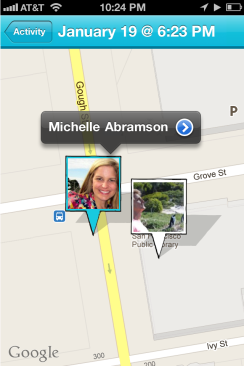 What if you could walk past people and know who they were, or find out if you have a mutual friend without having to introduce yourself? An app for that launches today.

Highlight is the creation of Paul Davidson, the former entrepreneur in residence of Benchmark Capital. While formulating a company at Benchmark, Davidson kept returning to this “serendipity” that is meeting someone. And unlike the romantics who appreciate life’s little meet cutes, Davidson wants to remold chance encounters into opportunities to have a working knowledge of someone off the bat.

“The real world is just this bizarre-o version of Facebook, and every profile is just a single photo,” Davidson said in an interview, “That version sucks.”

The app, available on the iPhone, is pretty simple. You download it, connect to Facebook and then are asked to close the app. That’s pretty much it. Once installed, the app runs in the background, checking people’s phones physically close to yours to see if they have the app too. If that person has Highlight installed, you’ll receive a notification with their profile information. This profile information includes name, photo, brief description, locations, history of places you’ve crossed paths, mutual friends and more.

“I’m completely convinced that in 10 years you’ll be able to walk into a room and know everyone’s name, all the things you have in common with them … it’ll just be like a sixth sense we’ll all have,” said Davidson.

So what about people who may use the app for bad, stalk people, or case the people they’re going to mug before doing so. Davidson believes that the benefits will outweigh the negatives. He likens the product to Facebook, a social network that holds data that touches just about every part of our lives. Having that data can seem like a vulnerability, but being able to interact socially, share your interests and connect with people digitally is enough to quell most concerns that profiles will be used inappropriately. 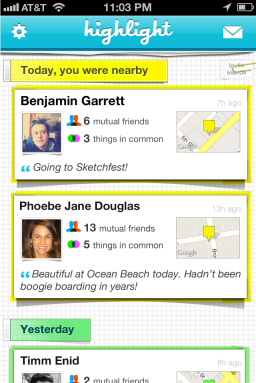 The kind of close-proximity connection Highlight offers already exists in other products. For instance, Color allows you to share photos with those in your immediate area, and the Nintendo DS connects you to other nearby DS’s to trade virtual goods.

Davidson explained, “With the right privacy controls, I think anyone would be willing to share some subset of information with some subset of people.”

And users do have some privacy controls, at this point, though they are limited. You can make your profile public, or available only to friends of friends. Davidson says privacy controls will evolve as people try the app and make suggestions. You can also pause the app if you’d like it to stop running while you’re in a particular place. It won’t turn back on until you open the app again.

Perhaps we’re all turning into some digital representation of ourselves. Highlight speeds up the Facebook stalking part of getting to know someone that has become somewhat customary amongst those of the information age.

“It’s not about meeting people,” he said. “It’s about having the technology to surface the meta data of people around you.”