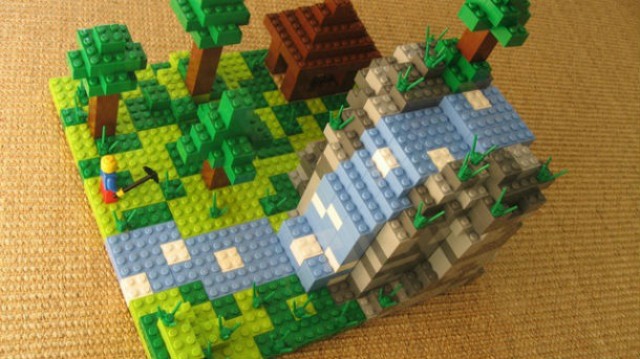 Seemingly a match made in heaven, a proposed collaboration between LEGO and hit indie game Minecraft has now been given the official green light.  A proposal for the idea was submitted by Minecraft developer Mojang back in December, and LEGO has now announced that it is “developing a concept that celebrates the best aspects of building with the LEGO system and in Minecraft.”

To get to this stage, the LEGO Minecraft project went through the official selection process at community site LEGO Cuusoo. This site allows anyone to submit their own LEGO ideas, which are then voted on by community members. The LEGO Minecraft project quickly received the 10,000 supporters that it needed to be considered further, and it has since been reviewed by a LEGO jury, to assess its viability as a retail product.

An announcement on the LEGO Cuusoo blog earlier today said, “Until now, the project has been in the LEGO Review—a stage before product development begins where a LEGO Jury evaluates the idea’s feasibility as a product and makes a decision. We’re happy to announce that the Minecraft project on LEGO Cuusoo has passed the LEGO review.”

LEGO sounds excited about what it has in store. “We can’t wait to show it to you—but it isn’t ready just yet. These things take time, so we appreciate your patience. More details are to come.”

Minecraft was officially released in Nov 2011, but had been available to play for over two years prior to that. Developer Markus Persson recently revealed that the game has 20 million registered users.  If even a fraction of that playing community is interested in picking up LEGO Minecraft sets, then this collaboration looks set to have a healthy future.

LEGO Minecraft is one of the few Cuusoo projects to have successfully passed the support and review stages. The first project to be approved was the Shinkai 6500 set, based on “Japan’s proud creation of the world deepest diving manned research submarine”, which went into commercial production in Feb 2011.

Other projects still in the submission stage also make for interesting viewing. The LEGO Back to the Future set is currently the most popular project on the site, with 2928 supporters. It still has a long way to go before it reaches that magic 10,000 figure though. A proposal for LEGO Legend of Zelda is another popular suggestion, and LEGO Link has 1747 supporters behind him at the moment.