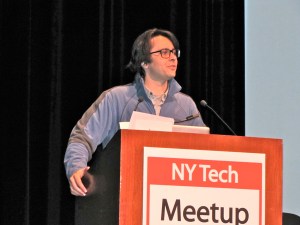 The New York Tech Meetup, a monthly gathering where startups can demo their products, is now more than 21,000 members strong and is the heart and soul of the Silicon Alley scene. It launched hometown heroes like Foursquare and Tumblr, and more recently brought the community together for a massive protest against the SOPA and PIPA bills.

For the last four years, Nate Westheimer has been the NYTM’s executive director and master of ceremonies, helping hundreds of companies to demo their products.

Now Venturebeat has learned that Mr. Westheimer will be stepping back into the role of full time tech entrepreneur, co-founding a new startup with Charles Forman of Omgpop and Jacob DeHart, the co-founder of Threadless. The company, an online photo-storage and synching service called Picturelife, has raised $600,000 from local angels.

The trio plans to keep things lean and build the product themselves for now. Westheimer put himself into self-imposed exile in a sweat lodge last year in order to learn how to code. “I’m excited to put my newfound programming prowess to work and get back in the game as a full time entrepreneur,” Mr. Westheimer told Venturebeat. He declined to say more about the about the project, or who had funded it.

Picturelife is still in beta, but a landing page describes it as, “the best way to keep all your photos backed up, synced, and organized so you can access them anywhere.” A local angel investor described it as a “picture aggregator and Flickr killer.” It aims to keep customer’s photos from across computers, phones, cameras,  and web apps synced and securely stored. Expect to hear a lot more about the project in a month or so when it officially launches to the public.

While Omgpop has raised over $16 million in venture funding, there is a full executive team in place that can run the business without Forman. And DeHart, who lives in Chicago, has stepped down from his day-to-day work at Threadless.