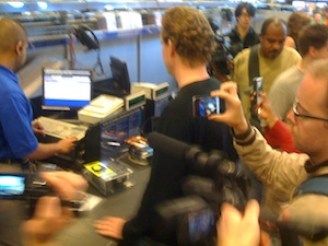 Shopkick, the app that lets you earn rewards and deals simply by walking into a retail store, is kicking butt.

The company has pulled in over 3 million active users since launching over a year ago, it said today. And over a billion of its in-app deals and offers have been viewed.

Shopkick’s app communicates with a patent-pending device in stores, letting customers earn rewards simply by strolling into a store and looking at products. All you need to do is have the app open to earn rewards — there’s no hunting and pecking for locations (and praying that GPS functionality works) that you get with an app like Foursquare.

The app’s success shows that Shopkick is certainly on to something. Consumers love earning rewards and free stuff, and retailers get a simple way to target specific customers.

During the holidays, Shopkick users interacted with stores over 3.1 million times a day, up from just 1 million in August. The company says it has seen over 5 million retail store walk-ins as of December 2011.

Shopkick’s technology has now been deployed in over 4,000 stores and 250 malls cross America. Recent partner brands include Old Navy, Disney, and Levi’s.

Other notable stats: The company has seen over 150 million interactions with retailers since it added Old Navy in November. Sixty four percent of Shopkick users are women (more than half of whom have kids), and the average user is 30 years old.