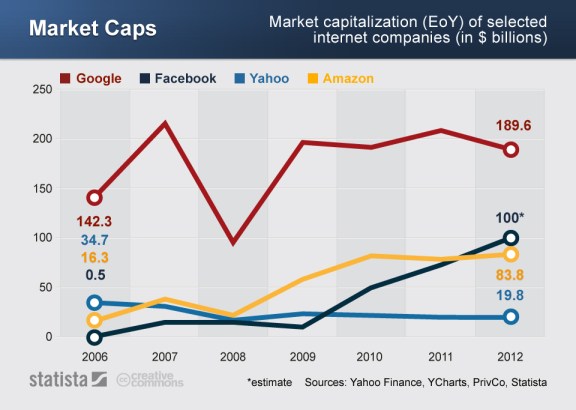 Yahoo’s new chief executive, Scott Thompson, has his work cut out for him.

Thompson, who started his new job earlier this month, will be doing his first earnings call this afternoon. It can’t be a pleasant way to kick off a new gig. Yahoo founder Jerry Yang left the company last week, analysts are estimating the company’s earnings at a mere 24 cents per share (a 6.5 percent drop from a year ago), and, according to an analyst quoted by Bloomberg, people are only investing in Yahoo with the hope that it will realize some value by selling off all or part of the company.

Competitively, Yahoo doesn’t look nearly as good as some of its rivals. Check out the charts below, compiled by statistics aggregation company Statista: Yahoo’s market value has stagnated, while Facebook and Amazon have soared, and Google has remained loftily in the lead. Today, Yahoo’s market capitalization is just $19.8 billion. Compare that to $83.8 billion for Amazon, an estimated $100 billion for Facebook (the market cap that many expect it would have if it were to go public today), and $189.6 billion for Google.

If you divide market cap by unique visitors, the picture gets even worse. The second graph below shows the implied value of a visitor to each of these sites, using their average market capitalization in 2011 and the number of unique visitors in March, 2011. In this view, each visitor to Amazon accounts for $323.07 of the company’s overall value. That’s not surprising, since Amazon visitors are shoppers and spend real money on the site. Visitors to Google account for $182.44 of the company’s value, while Facebook visitors contribute $89.32 apiece. (As an aside, visitors to Facebook spend far more time on that site than on any other major site.)

But the average visitor to Yahoo contributes only $28.72 to the company’s overall value. 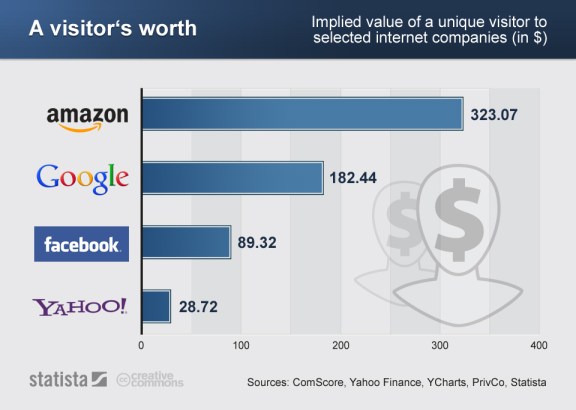 There is one area where Yahoo is strong, and that’s in comparison with other portals, like AOL and MSN, particularly in the U.S. The last graph here shows unique visitors to a variety of major portals in the U.S. and selected other countries. As you can see, Yahoo’s 190 million U.S. visitors give it a strong showing versus MSN’s 130 million and AOL’s 61 million.

So if Thompson runs into trouble today, we can suggest one fallback position: Hey, at least we’re not AOL. 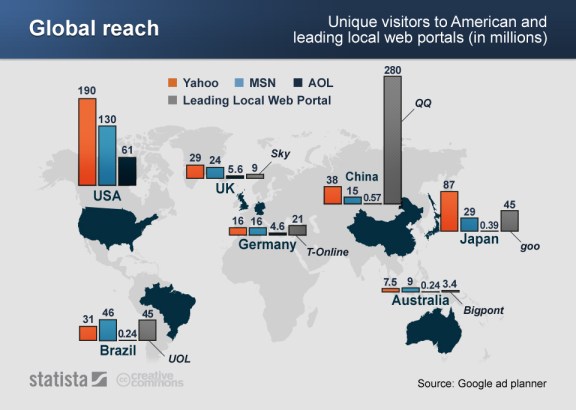