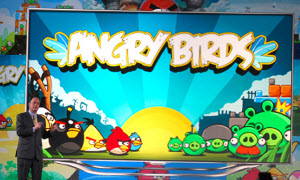 Angry Birds fans may be staying home without a date on Valentine’s Day, but at least they can hang with a few hundred friends. That’s when the popular mobile game will debut on Facebook for the first time.

Angry Birds is the most successful mobile game in history with more than 700 million downloads since its launch in December 2009. To keep growing, it has to expand to just about every platform on the planet.

Peter Vesterbacka, the Mighty Eagle at Finnish game maker Rovio, confirmed in an email that the launch is set for Feb. 14 and the company will hold a formal launch in Jakarta, Indonesia, which has a huge Facebook following with 41 million of Facebook’s 800 million users.

“We are going after the emerging markets in a big way this year,” Vesterbacka said.

Vesterbacka also said that every Nokia Asha feature phone comes with Angry Birds preloaded on it. Rovio aims to cross 1 billion downloads this year. Angry Birds will be pre-installed on every new Samsung Smart TV (pictured at Samsung’s CES press conference above).

Vesterbacka said to Penn Olson that the Facebook game will be able to run on a full screen and have better animation quality. Rovio will introduce new powerups like an earthquake or stronger birds which you can buy for 99 cents or earn while you are playing. Angry Birds will also have social features on Facebook such as leaderboards where you can earn bragging rights.

Rovio will have a Year of the Dragon update to Angry Birds Seasons for the Chinese New Year.