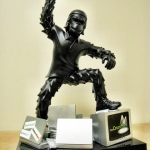 It’s time to get excited for The Crunchies Awards. The final line-up of notable guests has been released, making us all the more excited to co-host this star-studded event.

Harris Wittels, “Parks and Recreation” writer and all-around funny guy, will take the stage as the host of the 2011 Crunchies Awards next Tuesday night, January 31. VentureBeat, GigaOm, and TechCrunch are hosting the event, awarding the best tech innovation of 2011.

Tickets for the event are still available if you’d like to attend, but they’re going fast. There is also still time to vote for what company you think should win best startup, app, or device of the year. Are you an Evernote fan? Want to see the Kindle Fire win for best new device? Or maybe you have a soft spot for the new startup Pinterest? You have until midnight on Sunday, January 29 to cast your vote.

Following the ceremony, winners and guests will celebrate at the after-party. Get ready for a fully hosted bar, hors d’oeuvres, a casino game room, and so much more fun.

Wittels is well known for his Twitter handle @Humblebrag, where he retweets boastful and humble tweets. As apart of his hosting performance for the Crunchies, he plans to read out a few tweets he finds. Want to get a shout out? Tweet your best humblebrags between now and the start of the show with the #crunchies and #humblebrag hashtags. Who knows, your 140 character message might get chosen.