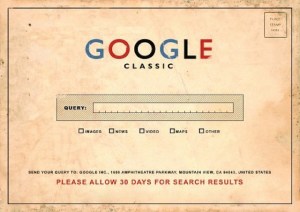 The first thing you need to keep in mind about Google’s business is that it’s an advertising marketplace.

The “search engine” part of Google, the part we love, is constantly under assault as Google tries to adapt and keep its business growing.

Now, with the introduction of Search Plus Your World earlier this month, Google has shown us it may believe it has enough clout that it can more or less ignore its original customers, the individuals who use search engines to find relevant content. Instead, it appears intent to focus on building its marketplace, expanding its audience, and delivering ever-better results to advertisers — even if that means degrading the experience to search engine users.

Search Plus Your World is the feature that integrates results from your social network, led by Google+, into search results. You can disable Google’s social search, but it’s on by default. Search Plus has some odd effects, such as prioritizing results from Google+, which is a tiny network compared to other, larger social networks like Facebook. Those results aren’t often especially relevant, so it looks like Google is just trying to pump up usage and pageviews for its own social network at the expense of competitors.

As VentureBeat’s Matt Marshall argued here last week, Google seems to be selling its soul. In the past, Google has always kept search engine relevancy sacrosanct, but for the first time, Google appears to be wavering on that. Search engine expert Danny Sullivan found additional fodder for this argument this week, when he found an obvious bit of (irrelevant) search engine marketing cluttering up a search he made for “santorum.”

Now a search marketing expert, Tom Blue, has discovered another bit of irrelevance: Some random post by M.G. Siegler showing up in the fourth position in a search he did for the word “television.” Siegler is a former VentureBeat writer, a minor Silicon Valley celebrity and a tech investor, but he’s certainly not the kind of worldwide expert who you’d expect to show up on the first page of results for a topic as massive as television, especially with an offhand post about a product that doesn’t exist yet. He’s also not in Blue’s circles on Google+. A search for “Christmas” put Siegler in the #2 slot.

Now, of course, there may be a logical reason Siegler is showing up in Google’s results. Many of Blue’s contacts may also be contacts of Siegler, and so Google’s algorithm may be listing Siegler as relevant to folks like Blue even if they’re not directly connected with Siegler. But the fact is, Siegler’s results aren’t relevant to Blue (as he attests in his post), and that’s where this fails. It increasingly appears this is all part of on-going experimentation by Google to tinker. To be fair, Google may be doing this quickly, to try to find a way that works better for people. But by moving quickly and not testing relevance before inserting such results so quickly, Google is opening itself up to criticism about why it’s doing this.

The point is, they are injecting Google+ into the results, and rather highly into the results, regardless of the relevance of that particular result. The algorithm may go something like this: search Google+ for the same search critieria, and then post the most important person’s results.

The procedure seems to be fairly straightforward: Put the Google+ result somewhere between the second and fifth position.

When I tried the same “television” search, guess who showed up in Siegler’s spot? Me. I had a similarly irrelevant post about the same nonexistent television as Siegler, but, in Google’s defense, at least I’m relevant to myself. A search for Christmas turned up a photo of some boozy Christmas gifts my friend John Abell had received, the lucky bastard.

When I tried the search again in Chrome’s incognito mode, hiding my personal information from Google, the Google+ and blog posts disappeared.

There’s some indication that Google has heard the cries of outrage, and has already started scaling back social search results, as PandoDaily’s Sarah Lacy reports.

That might come too late for some. Like Mat Honan at Gizmodo, I’ve experimented with switching my default search engine to Bing, and I’ve found that its results are at least as relevant as Google’s, and often more so, given that they’re not cluttered up with marginally-useful social search results. As a bonus, you can still use the + operator in Bing searches, which is nice for a search geek like me. Also, with Bing, I can copy the URLs of search results directly from the results page, instead of having to click through to avoid Google’s nasty, long referral URLs.

The Search Plus scandal is a warning to be cautious about relying on the search results from any one provider, and it’s a reminder that, whether you use Google or Bing, you are not the primary customer.

When Google ruffles feathers by changing its search results to prioritize its own products, such as Google+, over far more popular services like Twitter and Facebook, it’s making a calculated gamble: What it stands to gain from its customers (advertisers) outweighs any goodwill it might lose among its producers (you).

Yes, you are a producer of Google’s core product. Every time you do a search on Google, watch a video on YouTube, visit a website with Google AdSense ads on it, or post an item on Google+, you’re providing the raw material that Google needs: Attention. That brief instant that your eyes sweep across the ads on this page before locking on to these very fascinating words are the ore from which Google refines its product.

Add up a billion such passing glances, plus the occasional click, organize them through a marketplace designed to help advertisers find the optimum combination of keywords and context, and Google has a hot commodity indeed. Advertising produced nearly all of Google’s $37.9 billion in 2011 revenues. The advertising contingent is led by America’s much-beloved financial industry, which contributed $4 billion to Google’s top line.

Google has already been personalizing search results, tailoring them to your location, for instance — a practice it’s maintained since 2006. Yet few people are aware of this, and I suspect even fewer care. (When I spoke to a high school journalism class in Palo Alto yesterday, none of the students knew that Google delivers different results depending on who and where you are.)

As a result, I don’t expect Google to change its behavior radically. It may scale back the number of Google+ results, and it might make some efforts to include more results from other social networks. But at the end of the day, its mission is to increase the number of people looking at Google-delivered advertisements, whether that means growing usage of its search engine, increasing the reach of its AdSense program to more websites, or driving more poeple to use Google+. Or even abandoning search altogether.