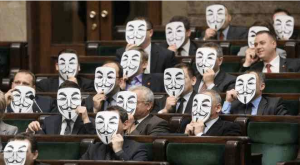 Has Europe gone mad? A trade agreement most Americans have never heard of has sparked outrage and protests across the pond.

Twenty-two of the European Union’s 27 member states signed the Anti-Counterfeiting Trade Agreement (ACTA) in Tokyo on January 26. In response, thousands of Poles marched in the streets, members of Poland’s parliament donned Guy Fawkes masks, and a member of the European Parliament quit in protest.

By contrast, when U.S. President Barack Obama signed the ACTA treaty on behalf of the U.S. on October 1, 2011, few in this country noticed. But when a somewhat similar bill, the Stop Online Piracy Act (SOPA), entered Congress the following month, it spurred massive opposition that culminated in a worldwide internet protest on January 18. SOPA is now all but dead, while ACTA lives on.

So what is ACTA and why are some people so upset about it? Let’s take a look.

The Anti-Counterfeiting Trade Agreement is an international treaty aimed at giving countries the ability to stop copyright infringement and other forms of intellectual property theft. It’s meant to create an international legal framework so that different countries can work with one another more cooperatively. You can read the full text of ACTA (.pdf).

Why are Europeans upset?

I want to denounce as the greatest of all the process that led to the signing of this agreement: no association of civil society, lack of transparency from the beginning of negotiations, successive postponements of the signing of the text without any explanation being given, setting aside the claims of the European Parliament [despite those views being] expressed in several resolutions of our Assembly. … This agreement may [have a] major impact on the lives of our citizens, and yet everything is done [so that] the European Parliament has no say. I will not participate in this charade.

What about the U.S.?

Senator Ron Wyden objected to Obama’s signing of ACTA on the grounds that it’s unconstitutional for a President to sign a treaty without the consent of two-thirds of the Senate. Obama did not consult the Senate, so there are some grounds for thinking that ACTA is not a legitimately-signed treaty.

What powers does ACTA give copyright holders?

The governments signing on to ACTA have pledged

In addition, ACTA gives rights holders the ability to collect damages equal to the market value of the infringing content. In other words, if you copy an album that sells for $15 or a game that goes for $50, that’s how much you owe.

What else has got people upset?

Unlike U.S. copyright law or the Digital Millennium Copyright Act, ACTA includes no fair use provisions. For instance, the DMCA lets people subvert copy-protection technologies in order to make personal backups, and copyright law in general allows exceptions for copies made for educational or scholarly use. ACTA has no such provisions. As an international treaty, it’s meant to supersede national law — which brings us back to the question, in the U.S., of whether this is a legitimately ratified treaty.

If I’m not pirating music, I don’t have to worry, right?

Not really. ACTA also applies to patents, and might criminalize possession of otherwise legal generic “grey market” drugs, if you happen to be passing through a country where those drugs are still  under patent. It could also impose obligations on customs and border patrol agents to determine whether material infringes intellectual property: Imagine how that might work when you’re flying into a new country or driving across the border from Canada.