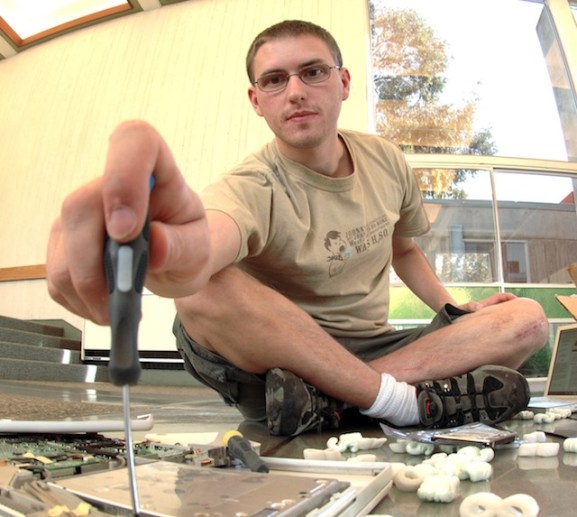 Apple recently announced iBooks 2 for iPad, which it promises will reinvent the textbook. Some even speculate that it will ignite a revolution in education.

Why? Because iBooks are sleeker, smarter, and equipped with a seemingly endless amount of innovative features, like animation, full screen photos, and videos. It’s no wonder that schools and students are jumping on the iBooks bandwagon (Apple sold nearly 350,000 textbooks in the first three days). iBooks is certainly inventive — but the improvements are evolutionary. Reinventing is a long way from revolutionizing.

The revolution is already at hand, and fortunately for the students of tomorrow, it isn’t iBooks.

By definition, revolutionary ideas throw out the old standard instead of merely reinventing it. iBooks digitizes textbooks, mixing in some rich media, simple quizzes, and a nifty note-tracking system. You can even search! It’s certainly a big improvement over print. But the essence of a textbook remains: a linear, monolithic body of knowledge.

Contrast this with Khan Academy, an online video library that is taking the educational world by storm. Its goal: to provide a world-class, free education to anyone, anywhere, anytime. It launched out of founder Salman Khan’s converted closet. Now, it has delivered more than 115 million lessons to students around the world via short video segments taught by “Sal” himself. While its presentation is engaging, the real impact stems from its ability to organize information into a truly individual experience where you can choose your own learning adventure.

It’s a model that has proven as effective as it is unorthodox: a school without walls, without a curriculum, and without textbooks. It is education unbound. And students are flocking to it.

I teach the way that I wish I was taught. The lectures are coming from me, an actual human being who is fascinated by the world around him… I felt like fascinating and INTUITIVE concepts were almost intentionally being butchered into pages and pages of sleep-inducing text and monotonic, scripted lectures. I saw otherwise intelligent peers memorizing steps and formulas for the next exam without any sense of the intuition or big picture, only to forget everything within a matter of weeks.

While textbooks are part of the problem, they are not the problem. It is education itself that is broken.

The prevailing system breaks the world’s knowledge into linear sections and static formulas. But the way we think isn’t linear—it’s associative. We jump from concept to concept, our brains naturally latching onto the next most interesting idea. The path to knowledge is best approached organically, not prescriptively. Any linear, chapter-based textbook format — even one as snazzy and as engaging as iBooks — is an anachronism.

Sir Ken Robinson, well known for his famous series of TED lectures on education, is critical of what he considers to be our grossly outdated, 19th century model of education. Instead of throwing our efforts into education reform, Robinson advocates that we “disenthrall” ourselves from relics of the past. We need to stop doing things that we have always done, just because we have always done it.

“Reform is no use anymore, because that’s simply improving a broken model . . . What we need is not an evolution; we need a revolution,” he says.

Visionaries like Khan and Robinson have shown the path forward: an education system that treats students like individuals. The future of education will be organic, associative, and explorative. It’s distinctly un-bookish, which means it is also distinctly un-iBookish.

Apple’s iBooks promises that all those “gorgeous” features will make students excited to learn about the solar system. But Apple already (as the saying goes) has an app for that: Star Walk for iPad. It’s an educational astronomy app that, like Khan Academy, promotes learning that is not segmented into parts and bound between two covers (even if they are virtual covers); it is education unbound. That’s the real revolution.

Sal Khan and Jimmy Wales of Wikipedia are empowering millions to learn without using a single textbook. They are promoting this learning revolution through self-service and knowledge portals, which lets users pursue the topics that most intrigue them. This sort of divergent thinking about education is the wave of the future, and more organizations should embrace a format that really facilitates long-term learning.

My company’s technical documentation software, Dozuki, is designed to teach people to do the things they want to do, when they want to do it. With iFixit (which runs on Dozuki), we don’t walk people through an entire repair curriculum before we teach them how to fix an iPod. We provide just enough information at the point of need, and give inspired individuals a path to learn more.

Here’s the real key to effective education: Give people the most intuitive, direct path to understanding what they really want. That approach has helped us teach 15 million amateurs to fix complex electronics, and it’s how Salman Khan is systematically revolutionizing education.

Textbooks are a broken form of knowledge acquisition, and it’s not because they’re made of paper. iBooks could have been so much more. Perhaps some day it will be.

Kyle Wiens is the cofounder of iFixit, the online repair manual. He’s currently starting a new technical documentation software company, Dozuki, with the goal of reinventing how companies make their customers awesome.