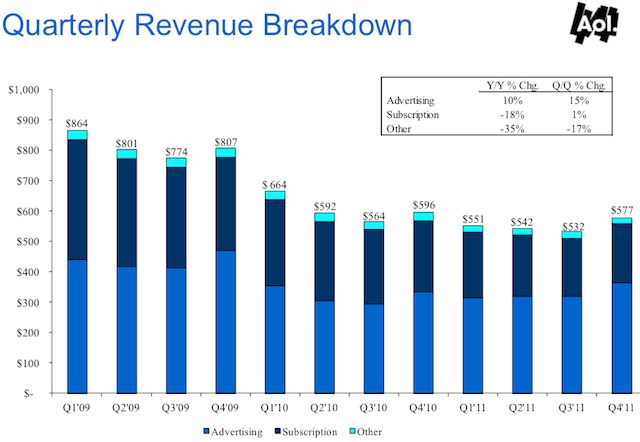 “AOL took a large step forward in Q4 and I am very pleased with the way we ended the year,” said AOL Chief Executive Tim Armstrong in the release. “Our Q4 results highlight AOL’s ability to methodically improve our consumer offering and financial performance”

Over the past few years, AOL has attempted to shift away from its roots as a dial-up Internet service provider in favor of growing its media and advertising business. However, some of the company’s biggest investors have previously expressed concern over AOL’s media business, due in part to poor profit returns on acquisitions, like the $25 million purchase of TechCrunch and the $315 million purchase of The Huffington Post. The company has also suffered from a number of top-level talent losses this year.

AOL attributes its ad revenue gains to increased display revenue from Patch, the company’s local news blog initiative, which investors accused of being a waste of time and money. On the call, Armstrong stated that the number of local “patches” that earned over $2,000 in monthly revenue went from 33 in Q1 to 401 in Q4. That’s still not a huge percentage of overall revenue, but at the very least the company is reporting growth.

“Patch is a highly scrutinized investment by our management team and our board, but Patch is not a pet project,” Armstrong said. “Patch is a business that meets deep consumer and advertiser needs.”