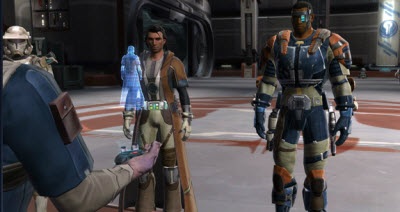 Electronic Arts saw better-than-expected sales of Star Wars: The Old Republic and Battlefield 3 in the third fiscal quarter ended Dec. 31, according to the company’s comments in its analyst conference call today.

After initially driving the stock down, EA’s performance has now driven the stock up 4 percent to $19.20 a share in after-hours trading.

“I think the stock goes up tomorrow,” said Michael Pachter, an analyst at Wedbush Securities.

The Old Republic sold 2 million units and 1.7 million are active. The difference is some have either not started playing yet or have quit. The gamers are playing 4 hours a day, on average, and logins are averaging 1 million a day. The Old Republic has had stable servers and EA had doubled the efficiency of the servers after the launch, resulting in less congestion for players. EA plans to deliver an update to the content in March. EA investors should greet those comments with some relief. Battlefield 3 sold more than 10 million units. Many investors were holding their breath, particularly on the performance of Star Wars.

Riccitiello said the fourth fiscal quarter would be hurt by the delay of a big social game, the shipment of more Star Wars The Old Republic games in December, shifting more titles that were expected to sell in January to December, and a weaker European retail partner. The retail partner, which EA did not identify but is likely GAME Group, could result in bad debt and losses for EA. The Star Wars title essentially did so well that sales were shifted forward by a quarter.

Those factors will reduce earnings per share by 15 cents in the fourth fiscal quarter. Riccitiello didn’t say which social game was delayed, but EA is rumored to be working on a social version of Sim City. Pachter said EA’s explanation made sense.

Eric Brown, chief financial officer, said stronger performance of Battlefield 3 and FIFA 12 offset weaker sales of Need for Speed: The Run. The Sims Social and PopCap helped digital revenues grow to $1 billion for the 2011 calendar year. Revenue from smartphones was up 70 percent, and mobile games as a whole were $59 million, up 25 percent from a year ago.

“It was another good quarter overall,” Brown said. “For calendar year 2011, EA was the No. 1 publisher in the Western world.”

In fiscal 2013, EA expects to launch about 20 titles in the packaged goods market. Frank Gibeau, head of EA’s labels, said that Battlefield 3 showed that making fewer and better games is a good strategy, with more than 11 million units sold. He said more content would becoming in 2012. He said the FIFA 12 title sold $39 million in micro transactions related to online play and trading.

EA said that its server infrastructure stood up well during the launch. Servers have been up and running 99.5 percent of the time, much better than other MMO launches.

“In summary, we nailed the launch,” regarding Star Wars, said Frank Gibeau, head of labels at EA. He said the reported lack of congestion is not due to a lack of players, as some analysts reported, but a tribute to good engineering.

In the coming quarter, EA has big launches with Kingdoms of Amalur: Reckoning on Feb. 7 and Mass Effect 3 on March 6. Riccitiello said that the company is now a very different company from what it was a year ago, with more emphasis on digital distribution and making more revenue from fewer titles. EA also has

“We’re a much better company than we were at the start of the fiscal year,” Riccitiello said.