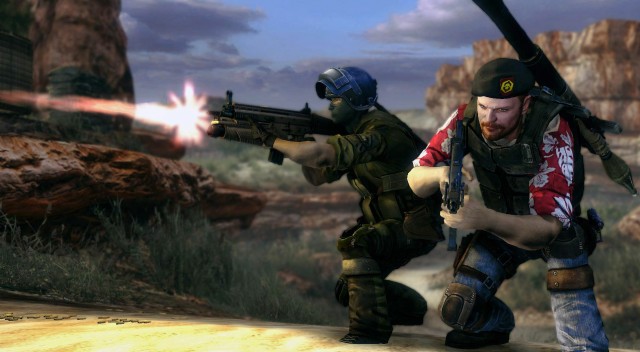 Online Warmongers is a company looking to bring the production values and quality of a traditional retail game to a free-to-play shooter. Over a million players have now experienced the beta test of its War Inc. Battle Zone game, and around 200,000 users are logging in every month. With the game due for full release in April, Online Warmongers’ founder Sergey Titov spoke to VentureBeat about building a balanced free-to-play shooter and his vision for the future of the game.

VB: Can you tell us about the background to the game and the team you’ve put together?

ST: When I left Riot Games (I had been serving as Technical Director since the company’s foundation until the summer of 2008), I decided to concentrate on online and free-to-play markets. At this point there was a boom of F2P [free to play] games in Asia, Russia and partially Europe, with some very weak waves hitting the United States. I founded Arktos Entertainment Group – my own investment and online publishing company – and bought out the shares of my partners in Void Production LLC, a Russia-based high-end technology development team.

I then set a goal to our CTO [chief technical officer] to build the best online game engine possible, tailoring it for FTP game requirements. By mid-2009, we had a pretty solid foundation — an extremely reliable and scalable server and backend architecture, and a client that not only provided a fast and very powerful rendering core, but was lightweight and scalable across platforms. In fact we had the client running on PC, Xbox 360, and PS3, and by the end of 2009 we were ready to take the next step – it was time to make a game using our awesome technology.

We had two game concepts; the first being a modern shooter with Battlefield-style game play. I am a huge fan of the Battlefield series, as are some of the Senior team members, and we’ve been dying to bring this type of experience to F2P. The other game idea was a Mech based combat game. The Shooter won.

At the same time we were talking to a few of our friends who were working on the Call of Duty series and also Star Trek Online, and they wanted to start their own company. So this is how Online Warmongers Group and War Inc. Battle Zone were born.

VB: What differentiates your game from other F2P military shooters, such as Alliance of Valiant Arms or Battlefield Play4Free?

ST: As I’ve said before, our goal was to bring traditional retail production value and quality to an F2P game. As gamers, we feel that there are two camps in free-to-play shooters. On one side we have several games that are fun to play, but they feature dated graphics and really low production values. On the other side we have Battlefield and Call of Duty – very high-end, very solid games, but they require the player to pay $60, then grind endless hours, days, and months just to unlock a new decent gun, for example.

This is what War Inc. Battle Zone is about. We offer a retail quality game in a free-to-play form.

VB: You say that War Inc is balanced to ensure that competitive and loyal players are rewarded. How do you preserve this balance while ensuring that players are still rewarded for their in-game spending?

ST: This has been the hardest thing to solve, and I really hope that we’re almost finished with this task. Basically, when playing War Inc. Battle Zone you always have a choice between spending time on the game and investing some real-world cash to speed things up. Our monetization is built upon that concept.

Yes, paying users will enjoy more convenience perks, as they can create highly customizable private games (basic users have a limited set of options there). They also have early access to new guns and gear, and they have access to some unique items that do not give them an advantage in the game but clearly identify them among players. They have more cosmetics customization options and so on.

It’s clear that our design works – around half of the top players are free players, while [the] other half are paying users.

VB: War Inc was entering its final beta testing period in December 2011. Is this still ongoing, and if so, do you have an expected date for leaving the beta stage?

VB: What kind of numbers do you have playing the game at the moment, and what percentage of players do you find spend money on the game?

ST: Since we launched open beta, slightly over 1M users registered and played the beta version of the game. Today around 200K players are playing the game every single month. As for percentage of paying users – I’ll just say that we’re making around $0.40 per day per daily active user.

We understand that still being in beta and actively changing the game design lowers our numbers and conversion rates. This is why we’re working as hard as humanly possible to get to the point when we can safely say, okay we’re done developing Version 1 of the game and we’re ready to officially get rid of the “Beta” stigma.