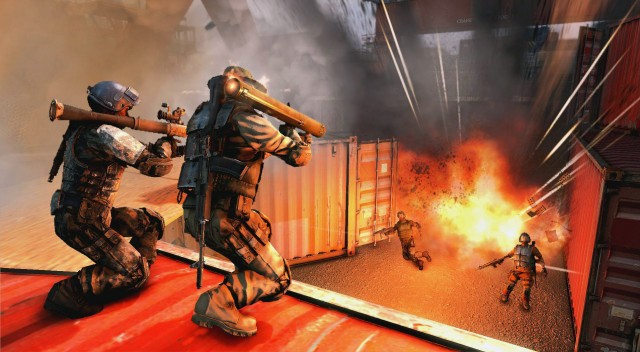 VB: How do you go about building a persistent community in the shooter genre, something that might come more naturally for, say, an MMORPG, filled with quests and associated collaborative gameplay?

ST: All online games are social by definition. Our goal as developers has been to create an ecosystem that allows players to communicate and brag to each other, as well as to foster team play and team competition.

We have several systems in place, such as the Friends feature already available in a game, and others are coming in the next two months, such as the Clans system, the Clans Warfare meta-gameplay, Tournaments, and Factions.

We have really concentrated on making sure that players will WANT to play together, forming clans, and being very active in a game. For example, by playing with others, by supporting your clan, by inviting your friends, and by helping new clan members, you’ll be able to earn our in-game cash currency – which is not available except by purchasing it in the cash store.

By joining a Faction and helping your Faction to win more battles, you’ll be able to access gear and items that are not available in the store.

VB: What was your target market for the game when you launched? Is this the same audience that has ended up playing the game?

ST: We launched the beta offering Battlefield-style conquest gameplay and a third-person perspective. Throughout the beta, we added a special gameplay mode for eSports teams. Expanding the game to hardcore Counterstrike fans, we added several smaller maps, making it more appealing to a younger audience comfortable playing Call of Duty games. Finally, we just announced that we’re adding a first-person mode with a very extensive visual customization system for weapons.

VB: War Inc featured in the World Cyber Games Russia tournament last year. Can you tell us a little bit about that?

ST: Most of the credit should go to our partners at Syncopate for pulling this off. When we were approached with this idea, we made a special mode in the game tailored to seasoned cybersports players. This is how the Sabotage game mode was born. We consider it an improved version of the diffuse bomb game mode from Counterstrike. We’ve been working with a leading Counterstrike team in Russia to make sure that mode is ready for primetime.

More will be coming this year, adding a global telecast system, a commentator mode allowing you to broadcast matches to a wide audience live over internet, and a special module to manage tournaments.

VB: Have you explored ways of opening access to your game to PC users with less powerful systems? Are there channels that could make your game accessible to a wider demographic? (Perhaps thinking of streaming tech such as Gaikai or OnLive).

ST: This year at CES, I’ve been using my 11” ASUS Zenbook ultrabook to show the game. It was running in 720p resolution at 25-30 frames per second. Yes, you have to turn off most of the high-end graphical bells and whistles, but even at low settings our game looks better than most Asian or Western F2P shooters.

On the other hand, if you have a pretty powerful computer, we’re offering all kinds of visual effects and tricks you expect from a modern, high-end game, like volumetric shadow casting particles, 100 percent dynamic lighting and deferred shading, depth of field effects, antialiasing, physically correct materials rendering, and dynamic ambient occlusion.

And, yes, we are constantly looking for ways to make our game accessible to more people. Right now we’re designing a version of the game that is specifically tailored for cloud streaming services like Gaikai or OnLive. In fact, Arktos Entertainment Group’s engineering team has plenty of experience developing game streaming solutions, seeing as it was our bread and butter in 2008-2010, so it’s a very natural fit for us. We’re working with leading TV manufacturers to bring our game to TV sets in late 2012, early 2013.

VB: With the upcoming release of Dust 514 on PS3, there may be further potential for F2P gaming experiences, particularly shooters, moving to home consoles. Do you see this as a viable avenue for exploration in the future?

ST: There are more than 100 million users who’re playing on consoles, so yes, this is nicely sized market. That said, there are a number of problems that need to be solved. Actually interesting that you’ve mentioned Dust 514, which is not a FTP game – as far as I know you have to pay like $15 or so to buy game. And, yes, you’ll get that money back in the form of in-game currency, but in a nutshell it shows problem number one – there’s no way to release true FTP game on consoles, i.e you have to charge something for your game. This effectively kills your biggest advantage of being a free game. It’s not a simple “download and play” deal for players anymore. They have to commit financially; they have to spend money before they’ll be able to play game. You can’t invite your friends easily anymore.

Another potential problem is user base segregation. I have all the consoles at home, I have a PC. I play on Xbox 360, PS3 and PC. Will I be able to play with my PC friends if I’m playing the Xbox version of the game? Will I be able to communicate with my friends playing on Xbox if I’m playing the PS3 version? All those questions have nothing to do with game design and technology, but have more to do with platform politics that need to be addressed first.

I personally and firmly believe that we will get there. In fact, our company has had a version of our game running on the PS3 that lets you play with PC users for about nine months now. But I really can’t say when this PS3 version will be available to players.