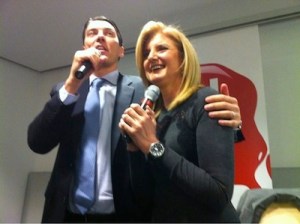 The new network will feature live streaming video content 12 hours a day during the week from 9 a.m to 9 p.m. ET, according to a THR report. Founding Huffington Post editor Roy Sekoff will head up the new network, which will be produced in AOL’s New York City and LA studios by a staff of 100 employees.

AOL said the new network will be available on a variety of streaming media platforms, such as Roku, Boxee, Google TV, Playstation, and others. The company also said its open to the possibility of launching a cable network further down the line, according to the THR report.

The target audience will extend from the main HuffPo website while catering to mobile devices. Sekoff described the content as “a never-ending talk show” that will “mirror the Internet experience.” The network, which is expected to launch in early summer of 2012, aims to create 30,000 on-demand clips.

Given some of AOL Chief Executive Tim Armstrong’s bold statements about growing the company’s video presence during yesterday’s Q4 earnings call, the news about the new network isn’t very surprising. The choice to transform the Huffington Post into a video network also makes a lot of sense. Armstrong said 70 percent of Huffington Post articles contain embedded videos. So, by producing the bulk of those videos in-house, AOL will be able to gain more leverage on advertising.