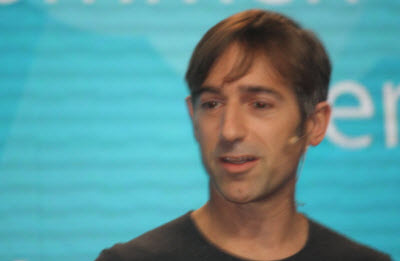 GB: So that whole reaction, did it surprise you? It turned into game developers saying, “Zynga can’t innovate” or “Zynga is a copycat.”

MP: We’ve elicited different reactions from the game industry, but they’ve gotten more and more positive. Whether it’s companies like EA or Activision. Bobby Kotick (CEO of Activision Blizzard) recently said in the Washington Post about how important he thought social gaming was and appreciated what Zynga was doing. I think that the gaming industry is warming up, not just to social gaming but to metrics.

At first, there’s always a fear of over-tuning. And so I think people went to an extreme. It’s in this movie Moneyball, the scouts who had been doing this for decades said, “A computer can’t understand the nuances that come in to what makes a great ballplayer. Metrics can’t tell you that. There’s an art that a computer can never learn.”

Similarly, I think that game designers and game industry people said, “You can’t design great gaming experiences just off of metrics.” In both cases, they were right, but it was the wrong question. It wasn’t whether you could replace a scout with a computer or replace a game designer with a computer. It was, could you give those people massive leverage to do their jobs a lot better and faster and get to the right answers faster?

That’s what I think we’ve proven, and I think we’ve innovated in lots of ways. I think that people in the industry are defining innovation differently than we are. When you define innovation you have to think, what problem are you innovating against? The problem that we’re innovating against is, how do we get a billion people to play together? That’s what we want to shoot for. We think we need to innovate as an industry to make that happen. And I think it’s a worthy goal. I think we are innovating as an industry and I think Zynga’s contributing massively to it. On many, many fronts.

We think there is a massive body of work in the video game industry and the gaming industry prior to that, that is going to be re-imagined for decades to come. In a way that is free, accessible, and social. That’s what we’re doing. I don’t think anyone should be surprised when they see us come out with games they’ve seen before, a decade ago or more. Because I don’t think there’s a whole lot of new games, totally new games and game mechanics invented. We are always trying to invent new mechanics. But to us they’re things like the crew mechanic in our games, that give you a new way to interact with your friends. The neighbor bar was a huge innovation. Picking friends I want to play with in a substantiated, permanent way. The crew mechanic, picking a smaller group of friends that are also active in the game, that I’m going to continue playing with.

The rest of the industry has followed all these innovations that we’ve done. The different kinds of revenue mechanics that we’ve re-imagined. We brought the mystery crate to social gaming. There’s many mechanics that we’ve brought for the first time to social gaming, or for the first time to a free mass market, that existed in MMOs or other places. But we re-imagined or re-invented them in this context, and the industry followed.

GB: A lot of the people who are concerned about the copying present a screenshot of two games. They point to it and say, “Here’s my screenshot, here’s Zynga’s screenshot, this is a copy of my game.”

More recently, I thought it was a little ironic to see Bingo Blitz… I think if you pull that lens back, it might look bothersome to you if you look at Bingo Blitz next to our upcoming bingo game. But if you pull the lens back, and you look at our game Poker Blitz, and then Bingo Blitz, you see some striking similarities in those pictures. You can go back to FarmVille and look at Farm Town and say, “Those pictures are troubling, they look too similar.” But you pull the focus back again and you see Farm Town next to My Farm and next to Happy Farm and next to YoVille, and what you see is a series of games innovating on top of each other. You see games that are borrowing… Farm Town had a very, very similar avatar to YoVille. They had a movable farm that was very similar to My Farm. And My Farm had a similar concept of farming to Happy Farm, which had been popularized in China. 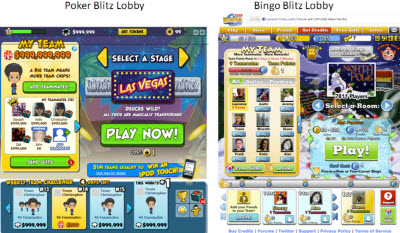 GB: What do you then get back to as far as, “What is original?”

MP: Here’s what you get to, okay. Two things. One is, what are we all innovating against? And what I would posit that we are working as an industry to do is to make play a mass-market activity for a billion people. And have a robust engagement and revenue model around that, with virtual goods to purchase. I think we’re all innovating against that. The second point is that what we’re really all doing here, but I feel like we’re kinda crawling around in the dark, as an industry we’re trying to get closer to what are the rules of engagement. There’s legal rules of engagement, which get to copyright and trademark law.

GB: Don’t use someone else’s code…

MP: Don’t use someone else’s artwork. We believed that there was strong evidence that Vostu had used our artwork, or something that was too close an approximation of our artwork. Don’t use someone else’s code. There are fairly clear copyright laws around that, and I think that’s good hygiene. But there’s rules of engagement that go beyond just that. This is where it gets more gray. There’s how differentiated your product needs to be to win and retain a large-scale consumer audience. And by the way, Dean, I’ll remind you that we run games as a live service that are updated weekly. And so FarmVille today is very different from FarmVille the day that we launched it. We’ve continued to innovate on that game, get player feedback and innovate, and we built things like crafting cottages. Which was the first time that crafting had really been brought to a very large mass-market audience, in a way that they could consume it.

GB: In that sense, then, if you take something from another platform of years ago, and you bring it to a new platform, that’s actually doing something new?

MP: It’s renewing it, it’s re-imagining it. And I think that is how art and media are innovative. It’s years and years of bodies of work. The brilliance is someone going back and seeing that there was some beauty in the 1970s whatever-movie Western and they re-imagine a 1970s spaghetti Western and call it True Grit. And we love it. But if we said True Grit is a copy because it borrows from all these Westerns and stories and other things that came before it, then we’re confining the medium’s ability to innovate. We saw two animated ant movies come out at the same time. One of ’em wins. At the end of the day the consumer wins. At the end of the day the industry wins. Because everybody is trying to innovate against this problem of…

Or eventually we’re against the same problem of, what do we need to do to make play a daily habit for a billion people? Amazon said, “What do we have to do as an industry to make a billion people comfortable doing e-commerce online?” Amazon said, “We need a wallet, we need an address book.” Amazon didn’t worry about whether or not they invented an address book the world had never seen before. Amazon worried about, what was the best address book? I’m sure that Amazon looked at every address book ever created before them, and either acquired it or built it. The same with the wallet. I’m sure that we as consumers today don’t care how Amazon got to the most convenient wallet and address book. We just choose Amazon because they did.

GB: The purist game developers who might wonder what you think. This game thing, is it an art, a business, a technology? Exactly what is it? How does Zynga look at it, say, differently, than people who consider themselves to be artists?