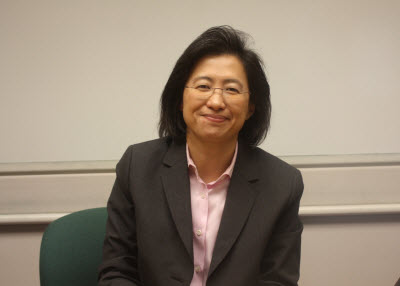 Intel will be a formidable competitor this year as it launches new processors and a huge marketing campaign aimed at driving the adoption of thin and powerful computers known as Ultrabooks.

Advanced Micro Devices will compete with the world’s biggest chip maker by coming out with high-performance laptop chips that are a lot less expensive for consumers.

“We like the idea of Ultrabooks as thin and powerful computers, but we think they should be for everybody,” said Rory Read, chief executive of AMD, in comments made to VentureBeat after Thursday’s analyst meeting.

Lisa Su, senior vice president for global products at AMD, said in an interview that a number of the Ultrabooks — some 7o to 75 models are coming out this year — are going to be priced at around $900.

But Su said that thin laptops based on AMD’s upcoming chips will likely hit the market priced as low as $599. AMD plans to introduce a series of chips code-named Trinity, which will be its second generation of accelerated processing units, or APUs. The APUs combine a microprocessor and graphics processor on a single chip, much like Intel does with its Sandy Bridge chips. But Su said AMD has loaded its combo chips with much more graphics capability than Intel does. So the AMD-based $599 laptops may actually perform as well as or better than many of the Ultrabooks.

Intel, of course, begs to differ. And it plans to spend hundreds of millions of dollars starting in the spring promoting all of the great things people will be able to do with its Ultrabooks, which are no more than 18 millimeters thick, can be turned on instantly, and have enough processing power to run full-fledged PC applications. There is no reason that these Ultrabooks have to carry a higher price, and Intel says it fully intends to get Ultrabooks in the hands of everyone.

When Intel last launched a major advertising campaign in 2003, it sold consumers on its Centrino chips, which made it easier for laptops to get on the Internet. Intel also designed low-power chips and captured a much larger market share in laptops than it had in the general market. Now it wants to steamroll the market again.

The Ultrabook campaign thus represents a big threat to AMD, even if AMD’s chips might be better. Su believes that computer makers will be able to discern the true performance of the upcoming chips and create superior, low-cost laptops for consumers that don’t have the Ultrabook prices.

“I’d expect AMD to message better graphics performance, better battery life, good enough general compute, at a lower price enabled by lower priced silicon,” said Patrick Moorhead, analyst at Moor Insights & Strategy, and a former AMD executive. “By leveraging Intel’s investment in thin chassis and Windows 8 fast start, they have a chance of getting some business. One element AMD has not addressed yet is advanced security, a feature that Intel has invested in heavily. This play is a reasonably simple one which AMD has run before with a twist.”

Su said that the timing of Trinity is good for the summer, since Microsoft will be launching the Windows 8 operating system later in the year and computer makers will be launching a huge number of new computers later this year.

“We’re going to a lot better on power and performance trade-offs,” Su said.