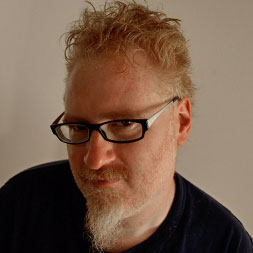 Earlier this month, Tap Tap Tap reported that its Camera+ iPhone app had raked in $5.1 million since launching in June 2010. In this exclusive interview with Tap Tap Tap founder John Casasanta, we talk about the company’s run-ins with Apple, the secrets behind its record download numbers, and developers’ hopes for the iPhone 5.

VentureBeat: Camera+ has been out since June 2010 and has had its ups and downs (volume button shutter release, anyone?). Tell us a little about the app and Tap Tap Tap’s history.

John Casasanta: I’m one of the original founders of Tap Tap Tap. We started back when the App Store first opened and I headed-up the company. I came up with the original concept for Camera+ back in Summer of 2009 but it’s come a long, long way since then. Along the way, we’ve released a lot of updates with many new features and enhancements and grown the development team from just a few people to around 15. I currently serve as producer of the app, but turning the app into what it’s become has been a major effort by many very talented people.

The app was kicked-out of the App Store for around four months in 2010 but then returned in late December of that year as version 2 and spent most of 2011 toward the top of the charts. It was the top selling non-game app of the year. The thing that lead to us getting booted from the App Store was violating Apple’s guidelines by including a feature that enabled users to snap photos using the iPhone’s volume button. Yet in iOS 5, Apple adopted that very feature and tried to pass it off as their own. After more bureaucratic bullshit than I care to mention, we finally got the feature back in Camera+ with our latest update.

VB: Your blog post about the sales numbers is interesting in many regards. What I don’t see is a discussion of how price drops have played into the spikes or sales figures. Do you see temporary sales or price drops as a viable contributor to Camera+’s current success?

Casasanta: One funny thing about the App Store and pricing is that an app will tend to gross roughly the same amount no matter what the price of it is. If we double the price of an app, the sales will typically go down to around half the level they were for a net gain of around zero. There’s usually a short spike associated with putting an app on sale and the charting effect can work in your favor in some cases, but in general, longer sales generally have a negligible (and sometimes a negative) effect on grossing. One thing that lower pricing is useful for, though, is building-up your customer base if you’re shooting for bigger raw sales numbers.

Along those lines, we’ve just had our biggest month to date and have actually hit over 1 million sales for the past 30 days. It’s a pretty incredible milestone for us and it’s truly amazing to see how Camera+ has grown since its inception. 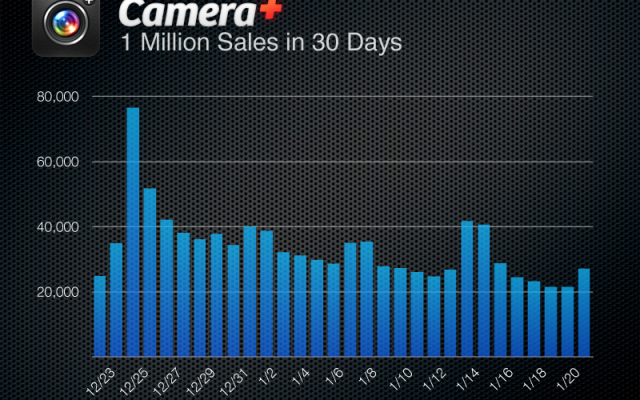 Above: exclusive to venturebeat

VB: There are seven apps on Tap Tap Tap’s website. How have the sales of the other apps helped or hindered Camera+ development and sales? Do you have app-specific teams, or does your whole company work on an app at a time? Do you think diversifying is still an important activity for developers in the face of an overwhelming success like Camera+?

Casasanta: The various apps have little to no effect on one another. The development teams are distinct for each app (with some overlap here and there). Companies often try to build-up their brand but we’re just the opposite. Besides the actual Tap Tap Tap website, you’ll rarely see the Tap Tap Tap logo on the website for an individual app, except at the very bottom of the page. We work hard on building-up the brands of the individual apps versus the company brand. So there’s not much benefit that one of our apps will get from the existence of any of our others.

Over time, it’ll make more sense to focus on building the company brand, but we’re nowhere near that stage yet. It’s a common mistake for startup to swim against the grain and try and do that from day one versus focusing on what’s really important.

Diversifying is something we’re doing mainly because there are so many interesting things to create. We could put everything we’ve got into just Camera+ development, but that’d be boring because there’s so much more out there.

We’ve been very fortunate so far in that all of the apps we’ve launched to date have made it into the top 10. Each of them has had varying levels of success with Camera+ obviously being the most significant with over 6 million sales to date, but we’re now closing-in on our 10 millionth overall sale for all our apps. So the other apps play a big part in our success and we’re hoping that some of the things we have in the works will be even bigger successes than Camera+.

VB: Your blog post mentions how the iPhone 4S release, with it’s many hardware camera improvements, helped drive sales of Camera+. Do you plan on capitalizing on the release of the iPhone 5? If so, how?

Casasanta: We were planning on capitalizing on the iPhone 5 back in June but they stuck us with this interim 4S thingamajig for now. But yeah, when an iPhone 5 really does [appear] and assuming that it has even more improved camera hardware, we’ll be doing what we can to take advantage of it.

But more than the camera hardware itself, I see some of the more significant improvements being done in software. Currently, the iOS SDK is fairly limiting regarding giving third-party developers low-level access to the camera hardware, and I definitely see that situation improving over time. When it does, we’ll be right there to do our best to add some cool things to Camera+.

VB: What’s next for the Tap Tap Tap team? Any plans for more in-app content for Camera+? Do you see in-app purchases and freemium app marketing strategies as the wave of the future or only the current fad?

Casasanta: We’ve been working very hard on Camera+ 3.0 since late Spring of 2011 and we’re finally close to getting it out the door. I don’t want to spoil the surprise and mention all the cool things that are in it, but I’ll throw you a teaser and say that one of the things that 3.0 will include is a very comprehensive API for third-parties to take advantage of. We’ve already seeded the beta of it to select developers so they’re already building it into their apps and we’ll have a bunch of great apps working with it for the launch.

As far as in-app purchases go, we’re being fairly cautious with that. Through in-app purchases, it’s become far to easy to turn an app into a nickel-and-dime-your-customers machine. One of our competitors, Hipstamatic, has greatly suffered because of that.

But this isn’t to say that we’re completely against it. For Camera+, we currently offer one add-on effects pack that sells for 99¢ and we get tons of requests to add more. So we plan to over time but were going to be very careful about the fine balance between adding value and bleeding customers.

The direction the industry is moving in this regard really does sicken me. The trend (mostly with games) is to have companies sitting around a big table brainstorming how to waste people’s time enough to the point where they pony-up some dough via virtual trinkets to prevent it. This is very unfortunate for society in general and companies like Zynga are the root of this evil in my opinion. Maybe I’m just old and crotchety but I recall a day when the primary goal of game designers was to create fun games. But I guess this new way is what we’re going to have to expect in this post-“appocalyptic,” 99¢ world where many of these entities can only be loosely called games.

And what saddens me about all this is the number of people who are OK with having their time wasted in this fashion. These are all the people who play these freemium games but don’t pay for the in-app purchases. From what I understand about the low percentage of people who actually pay, this number is pretty high. It kind of frightens me to think of what kind of society we’re becoming where the masses have built-up a tolerance to this kind of thing.

But worse, Apple is encouraging this behavior by featuring these apps. Apple used to set the standard for quality and one thing that the App Store has undoubtedly done is drop Apple back several notches in the quality department. I don’t think there’s anyone out there who’s been a fan of what Apple produces who looks at the App Store as a model of anything resembling quality overall. To put it bluntly, the App Store has been one big wart on Apple’s once fairly pristine ass. The good thing is there’s nowhere to go but up.

And again, I’m not trying to say that in-app purchases are inherently evil, even in games. One example of doing it (relatively) right is Rovio with their Mighty Eagle in-app purchases in the Angry Birds games. While I’m not a fan of the aspect of paying for it to more easily advance past levels, what it has done is added another dimension to the games themselves. Essentially, they’ve done it in such a way that you get a lot of replayability out of the games and it’s not done in the sleazy way that’s unfortunately becoming the norm for the so-called “games” these days.

For more info on the apps, including Serenity, Tap Tap Tap’s latest app offering, check out the company’s website, or its blog.