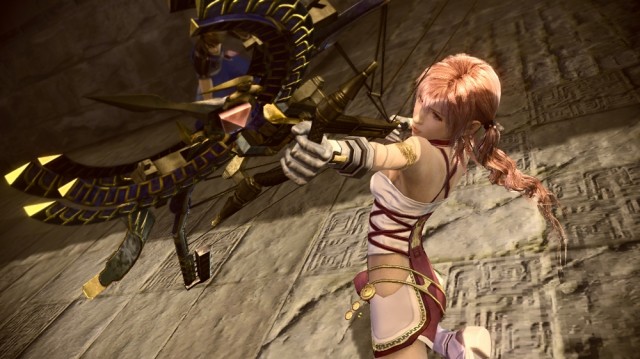 Serah Farron, Lightning’s sister, who was a driving force in Final Fantasy XIII but only had a few minutes of total air time, is now front and center, alongside newcomer Noel Kreiss, who has traveled back from the end of days to save the world. That’s right: time-traveling. Ugh, right? When does a movie or game or comic book or especially a TV show ever do time travel correctly, or at least coherently? Final Fantasy games are already complicated enough (I dare you to clearly explain what was happening in the final act of Final Fantasy VIII), so time travel can only exacerbate the labyrinthine narrative. Somehow, against all odds, the opposite is true. Final Fantasy XIII-2 manages to be the most succinct entry in quite some time, and through the use of paradoxes, it sometimes even makes sense.

Without giving anything away, Serah and Noel set out across time and space to find Valhalla and meet up with Lightning, who is not a playable character beyond the prologue (despite being heavily featured in marketing materials, and the game’s logo, and the cover of the box). There are roughly a dozen locations in the game, but many of these have alternate timelines to visit. For example, you can visit one location in the near future, then jump forward hundreds of years to see how things have progressed. Or perhaps you changed something and created an alternate timeline? You can then venture to that time and see if you made things worse or better. Sometimes it’s a little of both, and sometimes it’s just a bunch of different-colored mini-flans that need help finding their way home.

Cast
Whereas Final Fantasy XIII’s cast was overwhelmingly unlikable, Serah and Noel are well-developed. They’re not always sure of what they’re doing, but their bravery is unwavering. I liked playing as these characters, and wanted to follow their story through to the end. Serah’s history as a l’Cie gives her interesting perspective on the world, while Noel’s past (which is 700 years in the future, mind you) ties in to the underlying goal of the entire game, making it far more relevant than the typical backstory no one cares about otherwise. “I was just a flower girl before all this started happeni—” Shut up and summon Bahamut!

A few familiar faces will pop up from time to time, and while some are the same as they ever were, for better or worse, Hope in particular–easily Final Fantasy XIII’s most annoying character–is all grown up now. He’s much more fleshed out, and because he was such a whiny little bitch in the last game, he now has this added dimension to him. Final Fantasy XIII’s loss is XIII-2’s gain.

Every character has also been designed far more fashionably than before. Lightning in particular is sporting an awesome set of armor, but Serah and Noel’s outfits are… interesting, to say the least. Noel looks like Kingdom Hearts designer Tetsuya Nomura created a futuristic Aladdin, but Serah on the other hand has magically been bestowed with a paper-thin pop-star miniskirt. And I do mean it was “magically bestowed” upon her, as it replaces her old school girl outfit Sailor Moon-style at the beginning of the game, presumably a gift from Lightning to help her on her impending adventure. But unless Lightning is secretly a pervy 50-year-old character designer from the deepest dungeons of Square Enix Japan, it doesn’t make any sense for Serah to wear what most humans would consider, at best, a slutty sock. And why do characters wear the same clothes all the time? It’s annoying when no one ever changes their clothes throughout a single adventure, but what about when centuries have passed, and they’re still wearing the exact same thing? A small grievance, perhaps, but one I’d like video games to start taking a bit more seriously nonetheless.

Still, I was willing to overlook Serah’s outfit and a few other elements that could hardly be called realistic. While the story is generally a pretty sullen one, touching upon death and rebirth, and sometimes just death, on the flipside it also has uppity half-woman half-chocobo merchants and a “Flanborg” (you can imagine what that is if you’re a fan). Final Fantasy XIII-2 does the one thing that so many games and movies and animes fail to, which is efficiently balancing the absurd and comedic with the believable and somber moments.