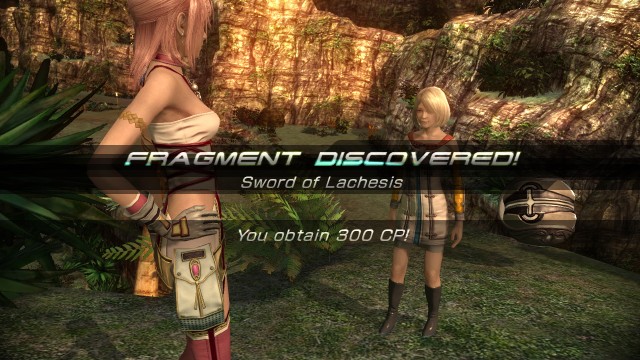 Audio/Visual
A large part of what makes Final Fantasy XIII-2 so enjoyable, and especially what allows the dev team to create more likable characters and standout interactions, is the superb presentation. Final Fantasy XIII was in development for five years, using the seventh generation of Square Enix’s proprietary Crystal Tools game engine. Final Fantasy XIII-2 has clearly benefited from the additional two years of time in the oven. To say this game looks phenomenal is an understatement. I feel going on and on about a game’s visuals is pointless when the screenshots and videos speak for themselves, but suffice it to say Final Fantasy XIII-2 is one of the best looking games currently available. Not just technically, but in the character, monster, and environment design, as well as the choreography during the cinematic sequences (and not just the ones where worlds are collapsing and monsters are exploding). It’s also nice that the main antagonist isn’t an evil pope wearing a wedding veil this time around.

Final Fantasy XIII-2, like all Final Fantasy games going back to X, features top-shelf voiceover work. Serah, Noel, Lightning and Hope are particular highlights, but even the disembodied voice that intros each area from the Historia Crux is done well. Mog, the cute flying imp that morphs into Serah’s when during combat, is the one point of contention. People seem to either love him or hate him (yes, for some reason it’s a him, despite clearly being voiced by a female actress). I can understand how he could begin to grate on the nerves (and ears) pretty quickly, but I honestly didn’t mind much. Plus whenever I needed to take out some aggression, I would just throw him down a bottomless pit with the Moogle Throw skill, so there’s always that…

Lastly, the soundtrack is a definite high point, for the most part. Longtime composer Nobuo Uematsu is no longer on board, but the new composers have managed to capture that signature Final Fantasy feel while boldly exploring new genres and directions. The first track composed for XIII-2 was reportedly a rap song, and indeed there are more vocals in this game’s soundtrack than any previous Final Fantasy. Unfortunately, these vocal pieces are undeniably the black mark on an otherwise masterpiece. The thrash metal that plays during certain boss battles is a particularly bad choice, while the metal song used wild riding mutant chocobos is annoying, but still somewhat fitting.

The entire soundtrack is available as a four-disc set, and I highly recommend hunting it down if you’re a devout fan. 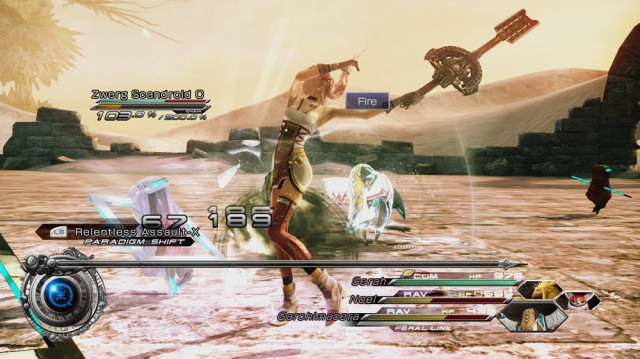 Combat
Final Fantasy XIII’s battle system was noted for being a bit mindless. Due to the rapid pace of the semi-turn-based active time battles (enemies do not “wait their turn” to attack like in most traditional JRPGs, so you have to act fast), an auto-battle option was added that would choose the most efficient set of spells, attacks, or abilities for you. The code behind it is actually very impressive, as the game will immediately change tactics depending on the weaknesses of an enemy, the status of allies, etc. But it requires very little skill or attention from the player.

In reality, how many RPGs ultimately boil down to spamming the attack button, or your most powerful spell, until everyone but you is dead? Final Fantasy XIII simply removes that illusion, and Final Fantasy XIII-2 doesn’t try to fix what, arguably, wasn’t broken. Almost every normal battle can and will be fought using the auto-battle command, but boss encounters require you to sit up and get more active.

This is where the Paradigm Shift system comes into play. Noel and Serah both have six roles they can choose from and level up, and can create different formations to switch between on the fly, depending on what’s needed at any given moment during a battle. Typically you’ll have a Ravager and Commando combo, which deals damage and quickly staggers enemies, making them vulnerable to air juggles and even more powerful attacks. But then you may need a Saboteur to weaken the enemy with status ailments, while powering up your own team at the same time with a Synergist. More than anything else, during tough battles you’ll need to switch in a Sentinel and a Medic, who can absorb damage and recover health respectively.

However, the combat is greatly enhanced with the inclusion of tameable monsters. Noel and Serah are on this journey alone (not counting Mog), but Lightning has granted Serah the ability to capture monsters into crystals and summon them during battle. What this essentially means is that you gain a third party member, as monsters each have one of the six roles assigned to them. You can work three monsters into your Paradigm “decks” at a time, allowing for quite a bit of diversity (though still not as much as I would have liked). Pretty much any RPG that restricts parties to a three-man team would be instantly improved by increasing that number to a quartet, but alas…